MUSIC REVIEW OF THE DAY: DAVID BOWIE - CRACKED ACTOR, BE MY WIFE (45) 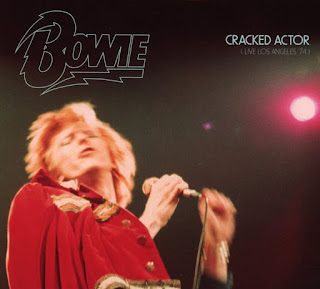 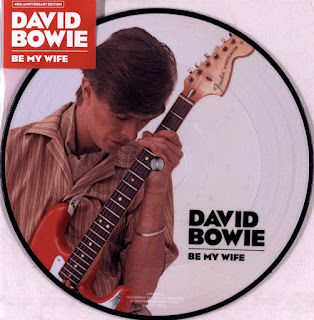 Released first on vinyl only for this year's Record Store Day and now a 2-CD set, this is a live album recorded in 1974, as Bowie toured the U.S. in support of his Diamond Dogs album. Wait, say the knowledgeable Bowie fans, isn't that the very same tour which the David Live album came from, released back in the day and still in print? Why would we need two live albums recorded just a few weeks apart?

Well smarties, here's why. David Live was done at the Tower Theatre in Philadelphia in July, but shortly after Bowie took August off to start recording what became the Young Americans album. That soul-infused album completely changed his outlook, so when he got back on the road in September in Los Angeles where this was recorded, it was a brand-new show. It was now called The Soul Tour, and was starting to lean towards the new sound he'd been working on. The band went from 11 to 16 pieces by adding a bunch of singers, notably the young Luther Vandross.

The setlist is pretty much the same as David Live, with a couple of notable differences. Added was the cut It's Gonna Be Me, which at that point had been recorded for Young Americans, but would later be cut so that Bowie could add the fruits of his one-day session with John Lennon, which resulted in Fame. It was later added as a bonus cut, but remains somewhat obscure. As an encore, Bowie trotted out his new re-make of the British John, I'm Only Dancing (Again), which had been turned into a full-out funk dance number.

But the bigger difference was in the sound of the band, as the emphasis switched from the rock of Diamond Dogs to soul, which crept into almost every song. That was heard in the big group of singers, now numbering seven, and the larger role for sax player David Sanborn. If there was ever a player who could handle the spotlight in that role, it was Sanborn, who positively shines from start to finish. The album isn't without its flaws, notably a couple of blown lines from Bowie, but I'd rather have a document than some patch job to fix things up. In October and November, the show would change even more, with unreleased numbers such as Young Americans, Win and Somebody Up There Likes Me debuted. Maybe down the line we'll get one of those shows as well, to complete the picture.

Also just out is the latest in the ongoing 40th anniversary reissue series of Bowie 45's, coming out as picture discs. This one is for Be My Wife, from the landmark Low album. By now, Bowie had fallen out of favour with the charts, doing his experimental, largely instrumental work, but of course it went on to be highly influential for '80's synth bands. As always, the B-side features a rare cut, this time a previously-unreleased live version of the instrumental Art Decade, to make us collectors have to buy it. But really, the fabulous photos on these picture discs make them hard to resist.
Posted by Bob Mersereau at 10:43 PM