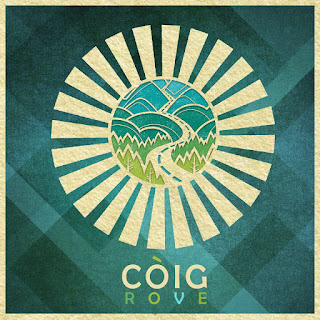 I've seen Cape Breton's Còig a number of times, so it came as a surprise that there are a few vocal tracks included on their new album. They usually let their flying fingers and bows speak on stage. It's an added bonus to have the singing among the jigs and reels, happily pushing the envelope sometimes, while then coming back to the solid, traditional Celtic base that makes them ideal ambassadors for the Cape Breton sound. Rachel Davis and Darren McMullen each take a couple of turns at the mic, with songs both old and new. McMullen has the biggest surprise, a subtle interpretation of Peter Gabriel's Solsbury Hill, with his mandolin leading the way and Davis providing a sweet harmony.

Elsewhere, the fiddles of Davis and Chrissie Crowley fly, while Jason Roach provides the crucial middle, his piano bringing all the strings together. McMullen colours each set differently, providing guitars, cello, bouzouki, mandolin, mandola, banjo, whistle and flute. The reels, jigs and strathspey sets are imaginative, drawing in themes from local Cape Breton heroes, the group's originals, and wild cards such as Dave Brubeck's Three To Get Ready. There's a lot of thought, and a lot of joy in this collection.
Posted by Bob Mersereau at 10:34 PM