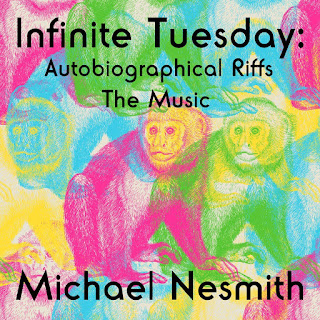 This is the companion soundtrack to Nesmith's new autobiography of the same name, and it sounds like his life. It's varied, exploratory, fun and underestimated. Life started out fascinating for him, as the son of a single mother that invented liquid paper and made a fortune. Things went uphill from there, from writing Top 40 hits for others (Different Drum for Linda Ronstadt), himself (Joanne from 1970), hanging in London with The Beatles when they were making Sgt. Pepper, sponsoring Jimi Hendrix in the U.S, being the conceptual father of MTV, coming up with various long-form video projects, working in virtual reality, etc., etc. Then there was that band he was in for a couple of years in the late 60's.

Even with his attention split in so many different ways, he can still put together one strong best-of, with music going up to 2005. It opens with a rare solo effort from pre-Monkees days, the black satire of The New Recruit, an anti-Vietnam piece he recorded as Michael Blessing in 1965. He was always struggling to get his compositions on Monkees albums, and those that did make it showed he was a true talent. Papa Gene's Blues, The Girl I Knew Somewhere and Listen To The Band certainly hold up as country-tinged pop.

When the band fizzled out, Nesmith was ready on the cutting edge of the L.A. cosmic cowboy scene. Bringing pedal steel into pop was a bold move, and resulted in the excellent Joanne along with the should-have-been bigger Silver Moon. From there, he got progressively more eccentric, often with excellent results, especially the groundbreaking music video concept Rio. More South American influences came in, and the excellent Laugh Kills Lonesome from 1992 features the rather remarkable merger of Latin and Western, from the album "..Tropical Campfires...".

There has been so much more to this man over the decades, but even he has come to realize he'll never escape the two-dimensional image television thrust on him in that crazed few years of hysteria and fame. Do yourself a favour and find out what he was up to when he wasn't monkeying around.
Posted by Bob Mersereau at 8:24 PM