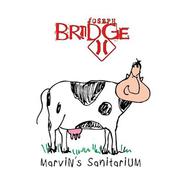 Cape Breton's Bridge has been tinkering on his opus for a couple of years, releasing it in pieces and versions, but now here it is complete, 16 tracks that take us through 24 hours in the life of our hero, Marvin Penn. Marvin's day is spent in a sanitarium, but it's also populated by colourful characters such as Mr. Waterpump and and Phyllis the Parking Meter Lady. It's all in the psychedelic spirit of Sgt. Pepper and Syd Barrett-era Pink Floyd. Some of the tracks came out on previous releases, like his self-titled 2015 album, and he's found a fan at BBC Radio 2, which has recognized the British/eccentric qualities.

While the quirky lyrics are loads of fun, what makes the release so much more than just charming are the wonderful performances. The Mind's Eye goes from Klezmer violin verses to prog-metal choruses, which had me reaching for the Uriah Heep albums to see if it was a cover version. Much like the beloved Pepper, whatever the songs call for, from raunchy rock to old-time singalongs, get summoned. Bridge is a musical polymath, dropping in a banjo whenever needed, every type of guitar effect with a killer solo to go with it, to silly little organ moments. That's silly, as in delightful. Don't let Marvin worry you, even with the straightjacket; as we find out, he's a lunatic, but a very friendly one. Spend a day with him, you'll have all kinds of adventures.
Posted by Bob Mersereau at 8:36 PM