MUSIC REVIEW OF THE DAY: BOB MARLEY and the WAILERS - LIVE! Deluxe Edition 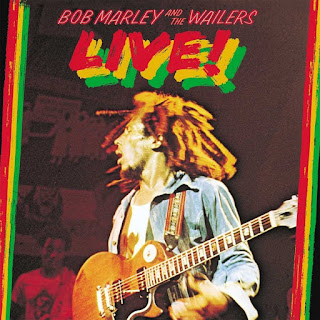 The Marley catalogue has been reworked so often, all the great '70's albums are on their third configurations, with more bonus tracks added each time. This live album from London in 1975 was quite the document back in the day, the only way you could hear the magic the mighty Wailers band put out. hear the party that most of us couldn't attend. Since the '90's there have been several live '70's concerts released, so this has lost some of its prominence in the canon, simply because there are now 20 different places you can hear No Woman, No Cry. It's still a must though, the band and Bob locked in and hypnotic.

The first reissue of the album, back in 2001, added the b-side Kinky Reggae to the original seven tracks. Now, it's been exploded to two disc's worth, including the entire first and second shows that night in London. Surprisingly, for a bunch once must assume was on a perma-herb diet, they were an orderly machine, with each show following the same setlist, the second set 10 minutes longer, with an extra two songs. The original album was a mix of tracks from both sets, but now we get them in the original running order. I've been told so many times how amazing these shows were from the audience, a totally euphoric experience, and I've always been slightly disappointed when that doesn't translate to the released concerts. Well, I think I've finally heard what I was hoping with this release.

The first set is the more formal, as you would expect. That's not to say the performances aren't excellent, Bob and the band sounding joyous to bring Trenchtown Rock and Rebel Music to all the JA people now living in England. He's a star too, reclaiming the hits others have had with his songs Stir It Up and I Shot The Sheriff. But you can feel the second show's audience is ready for a bigger party, and the band responds. They are looser, the solos more free, and the energy greater. Lively Up Yourself drives the crowd wild, I Shot The Sheriff this time is intense, and despite attempts to go, the audience insists on bringing them back, to close on a lengthy Get Up Stand Up. My heart was beating a little faster, some 42 years after the fact. Yes, it's yet another reissue, but this time it's well worth the upgrade, at more than double the original's length.
Posted by Bob Mersereau at 9:27 PM