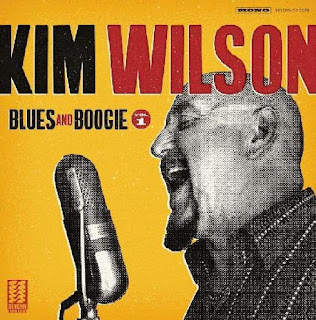 Wilson certainly has the blues pedigree, as a founder of the Fabulous Thunderbirds, and one of the most respected harp players and vocalists working. So when he decides to go back to the well for a set of deep Chicago blues, it's pretty much a given it's going to be done right. Wilson is calling this Vol. 1 with the intention of keeping on this path now, and it certainly seems a smart move. It's the classics, from Jimmy Reed, Little Walter, Elmore James and the like, plus a few of his own that fit right in.

The thing here is that it all sounds exactly right. Using a crew of veterans including pianist Barrelhouse Chuck and drummer Richard Innes, who both passed away after laying down their parts, the recordings have all the growl and grit that's meant to be there. Wilson's harmonica has the perfect amount of distortion, Chuck's piano is off in the distance slightly, like on those Chess recordings, and there are no rock or pop influences sneaking in. It's undiluted, and only people who have been studying this their entire lives could do this.

Almost all the choices are delightfully obscure, at least these days. Little Walter's instrumental Teenage Beat is a guitar and harp showcase, Wilson long ago learning that the key to a great harp solo is not how loud you blow, but how musical you make it. And while the old songs are played right, that doesn't mean the group copies note-for-note. They make John Lee Hooker's Same Old Blues very different from his in fact, with lots more parts, especially Jonny Viau's horn additions. Wilson has now become a classic, with a seasoned voice, gruff but musical, and his own cut Searched All Over sitting fine surrounded by the works of his heroes. He says he has lots in the can, and certainly these albums could keep coming a long time before they get old.
Posted by Bob Mersereau at 9:46 PM