MUSIC REVIEW OF THE DAY: BREAD - THE ELEKTRA YEARS 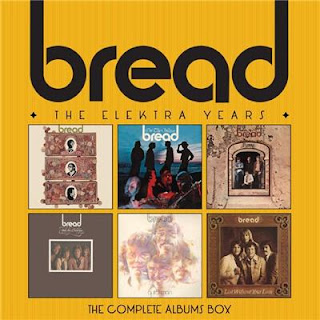 Perhaps the poster boys for soft rock, Bread are often cited and dismissed for belonging to that '70's genre. But they weren't The Carpenters, and had a lot more going on than the hits they are best known for. Most people assume David Gates was the whole band, but he wasn't even the main singer at the start. Gates had joined up with a songwriting team he had produced in Los Angeles, James Griffen and Robb Royer. They formed the group with Griffen as the lead singer, Gates as the ballads guy, and the songwriting split. Griffen and Royer had the rockier side, but their 1969 debut album was a bit of a failure, and Griffen's single didn't chart.

On the next album, they tried a Gates track, and that did the trick. Make It With You shot to #1 in 1970, and the die was cast. For the rest of the group's existence, Gates got all the A-sides, which meant what people heard were soft rocks ballads, his specialty. And the hits kept coming: It Don't Matter To Me, If, Baby I'm-a Want You, Everything I Own, Guitar Man and more. Every album brought another Top 10 hit or two. Meanwhile the albums were full of very well-produced and arranged pop tracks, even some stronger material such as Blue Satin Pillow, which proved Gates could rock when he felt like it too. In the meantime, they were developing into a tight group, touring all the time, and adding a permanent drummer in Mike Botts. While their peers were scoring kudos for their albums and live shows, Bread, who deserved the same, was still stuck in soft-rock limbo.

Royer was the first to bail out, as the inevitable tensions arose, particularly with Gates. He kept writing with Griffen, but the band was becoming a compromise. Gates drafted in an old pal from the L.A. session scene, Larry Knechtel, best known for playing the fantastic piano on Bridge Over Trouble Water, for the fourth album, Baby I'm-a Want You in 1972, and the band got even better. It was quickly followed by the Guitar Man album, with tracks such as Aubrey and the title cut making these pop gems.

But by that point Griffen and Gates were at odds, and the band broke up, Gates figuring solo life had more to over. Except something unexpected happened. The Best of Bread came out and sold an insane amount of copies, and the record label made the band members an offer they couldn't refuse. Bread came back for one last album in 1977, Lost Without Your Love, named after the Gates-written top 10 hit of course. There was touring too, but once again the bond proved fractious, and Gates having a hit with The Goodbye Girl on his own only made it easier for him to leave for good.

The band did solve their issues in the '90's and did a tour, but Griffen, Botts and Knechtel have all passed on now, and Gates is happy in retirement. For those who've only had a greatest hits all these years, there's lots more to discover on these six original albums, repackaged with replica album sleeves but no additions, making for a low-cost box set at around fifty bucks.
Posted by Bob Mersereau at 2:00 AM