MUSIC REVIEW OF THE DAY: SKYDIGGERS - WARMTH OF THE SUN 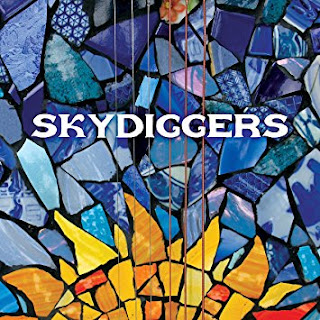 For the first time in almost a decade, the Skydiggers feel like a band again on record. In that time, it's been more the core of Maize/Finlayson, and then the addition of singer Jessy Bell Smith. It was just the three of them pictured on the last album, 2016's Here Without You - The Songs of Gene Clark. But if you've been to their more frequent live shows over the past couple of years, the touring musicians have felt like part of the team too, and now they are featured equally on this set of strong originals (and a couple of covers).
The full band is put to good use right off the bat, with ringing guitar chords announcing the title cut, a wistful rocker, the band putting lots of guts into a quite gorgeous melody. Beauty with punch is a good way to think of it. Push Comes To Shove could have been soft and sad and acoustic, but instead gets a rhythmic drive through the verses and a big chorus. This is the catchy roots feel that made early Skydiggers albums such as Restless so appealing.

There's still room for the quiet and bold interpersonal songs at which Andy Maize excels. The gentle acoustic baking of Don't Try To Explain is aided by light drums and tasteful guitar, plus the emotional edge Smith now adds to those songs, like the other side of the love song conversation.
Smith's role is now well-defined as second vocalist, adding another voice at important points to Maize's, handling the lead on the old timey Show Me The Night, not a regular backing singer, more of another instrument. On the mystical Time Of Season, she weaves back and forth with Maize, a different path on the same journey. And when Finlayson takes a rare lead on the country tune When You're On A Roll, she sweetens his rough edges.

The group has enjoyed doing cover tunes, and even full albums in the past, and once again they come up with a couple of great choices. They reclaim the '70's Hollies track The Air That I Breathe from the classic rock radio graveyard, certainly one of the underrated gems of that era. Singers as fantastic as Phil Everly, k.d. lang and Mick Hucknell have thought so too in the past, and the group's understated take is just as winning. The most poignant moment on the album is the quiet version of The Rock by The Tragically Hip, part of The Depression Suite on the band's We Are The Same album. Maize zeroes in on the intimacy of the lyric, the question "Are you going through something?" and reminds us all, as if we needed it, of the remarkable heart behind those words. The whole album shines with that kind of warmth.
Posted by Bob Mersereau at 9:56 PM