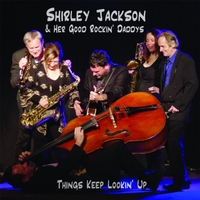 Nova Scotia's Queen of swingin' blues comes through with more horn-filled fun. Jackson's big arrangements use the whole horn section on the up-tempo cuts, which makes it just as enjoyable to listen close as to dance to them. She knows the down and dark side too, as on He Won't Be Coming Back, the tale of a man who talked a good game but then got mean. The swamp blues number sees him get his in the end.

Jackson keeps it mostly good-time though, with numbers such as Hot Rod Special, one of the album's several instrumentals including lots of those boppin' horns,and room for a sweet jive guitar solo from Tom Crilley, who finds lots of room even with the three horns. But hearing all the harmony horn parts and sharp leads, straight out of the '50's playbook is the big attraction here, and whether it's swing, jump or straight blues, this is the sound that doesn't let you down.
Posted by Bob Mersereau at 8:12 PM