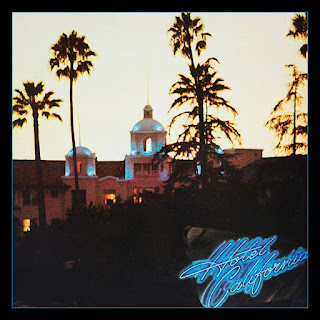 One of the most-played albums of all time, you still can't go a week without hearing the song Hotel California somewhere. But it's one of the very last mega-albums to be given some sort of deluxe treatment. The Eagles are one of the rare classic groups that has refused to go into the vaults and reissue their albums with bonus tracks, and there were barely any on their lone box set, so getting this anniversary edition has fans pumped.

I'll certainly praise the 2-CD expanded set. It has the original album remastered, and does sound a little sharper, certainly better than that old CD you had from way back. On disc two there's 10 songs from a live concert just before the release of the album, which features one of the earliest performances Hotel California and New Kid In Town, plus some classics from one of the best lineups of the group, with new boy Joe Walsh on board, singing Funk #49 (his old James Gang hit), and Randy Meisner on his last tour, singing the hell out of Take It To The Limit. The only thing special in the booklet is some new photos, but at fifteen bucks, this is a nice new edition to your Eagles collection.

As for the deluxe box, I haven't seen it, but fans are grumbling, so buyer beware. The only additional music is a third disc, a Blu-ray audio version with the 5.1 surround mix that came out back in 2001, so it's not even new. You also get a hardbound book (more photos), a replica tour book (with photos I imagine) and a poster. So that's it for almost a hundred bucks more. As some have pointed out, they could have at least given the full 2-hour concert instead of just 10 songs.

So yeah, I'd go straight to the 2-disc version this time, maybe someday a treasure trove of Eagles outtakes will appear, but maybe since they keep selling a ton of Greatest Hits and Hotel California, they don't have to go that route.
Posted by Bob Mersereau at 9:35 PM