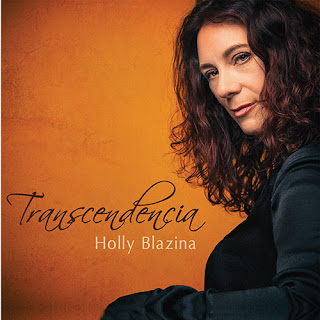 Many people that pick up a guitar rush headlong into performing, writing and even recording, but Holly Blazina had far more patience. The Calgary instrumentalist spent over a decade studying the traditions and intricacies of the flamenco form, learning from some the form's masters, before finally committing to this debut album. The result is a bold and ground-breaking album, which sees her confidently joining the ranks, while being one of the very few female nylon-string players in the genre.

While she studied with Spanish, U.S. and Canadian experts, Blazina also brought her own flair and interest in adding to the traditional sounds to the set. Here such different instruments as violin, piano and saxophone are featured, and broader hints of jazz and world music influence the selections as well. Still at the core are her own skills on the nylon strings, bringing out all the subtleties, allowing the instrument to move from quiet moments to whirlwind intensity. Meanwhile, there are plenty of vocal numbers featuring two gifted singers, lots of ensemble playing, and both the percussive handclaps and dancing that is such a distinct feature of the form. Often rousing, other times intimate, Transcendencia offers a full look at what flamenco music offers.
Posted by Bob Mersereau at 3:46 PM