MUSIC REVIEW OF THE DAY: VARIOUS - COVERED IN GOLD 5.0 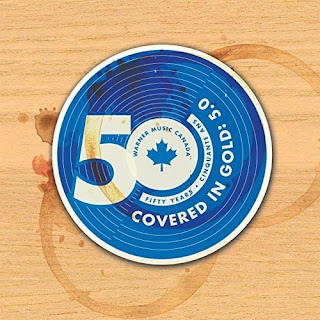 Warner Music celebrates 50 years in Canada with this compilation, which could have been a basic label best-of, the easiest thing to do. Instead, they chose a better but riskier path, getting the label's current roster to cover some classic tracks from its history. Plus, instead of going with the many famous artists from the U.S. and elsewhere the company distributes here, instead they have kept it all-Canadian. The fact they can do that shows the impact that Warner has had over the years, getting behind new artists such as Great Big Sea and Blue Rodeo, helping make them Canadian institutions.

The set kicks off with Scott Helman bravely tackling Alanis Morissette's huge hit Hand In My Pocket, which at first I couldn't imagine anyone else singing. But it's a very successful cover, and bodes well for the project. Alberta country star Brett Kissel gives an equally strong take on Ordinary Day by Great Big Sea, and I wouldn't mind hearing him edge more towards rock in the future. Meghan Patrick however makes Neil Young's Unknown Legend far more country than the original, and it proves a success too, a Young track that is often overshadowed but much-loved.

Ron Sexsmith was probably itching to cover a Gordon Lightfoot track, and bless him for finding a lesser-known one and propping it up. He does a beautiful job of Stay Loose from the East of Midnight album, proving the smaller Lightfoot songs are some of his most potent. Jim Cuddy puts the spotlight on the still-underappreciated Skydiggers with What Do You See. And as much as I hate Honeymoon Suite's New Girl Now, Modern Space make it sound like a New Wave classic.

I'm not crazy about all the updates. Neither Philip Sayce nor Courage My Love add any insights to Joni Mitchell's Woodstock or k.d. lang's Constant Craving, and the modern sounds added only point out how great the originals still sound. And as important as they are, having two Joni Mitchell and Neil Young cuts means lots of other possibilities were passed over. Anything from Ray Materick's '70's smash Linda Put The Coffee On to The Kings' Switchin' To Glide to Rheostatic's Claire qualified, so there was room for a left-field surprise or two. But this is much, much better than a pat-on-the-back best of Warner would have been, and even better as a double-vinyl set at 45 RPM.
Posted by Bob Mersereau at 10:21 AM