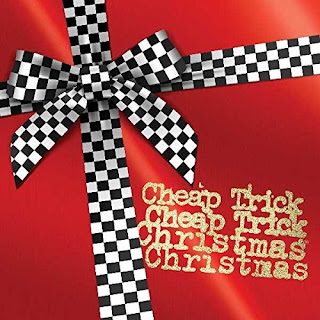 I used to have a rule about not mentioning Christmas albums before Dec. 1, but since y'all are decking the halls and packing the malls already, I guess I had better get to the new festive music early too. But to that neighbour down the street who had his outdoor lights up right after Remembrance Day, bah humbug.

Cheap Trick are a natural choice for Christmas music, because they are pretty jolly. Wisely, they stick to the fun rock neighbours, including a couple of their own new ones. Merry Christmas Darlings has that good old '70's glam rock feel, inspired by some other British hits featured here. I Wish It Could Be Christmas Every Day was released by Roy Wood's Wizzard in 1973, and in the U.K. it has the status of God Rest Ye Merry Gentlemen, but is barely known here. The Trick does it justice, with big energy. Same goes for Slade's Merry Xmas Everybody, pounded out here with its insanely catchy chorus. Cheap Trick can own these rock anthems in North America, since the hit originals get virtually no play here.

The now-classic SNL gag song I Wish It Was Christmas Today gets further legitimized by this full-on rock version by Cheap Trick, no doubt much to the delight of Jimmy Fallon. And just in case you think there no more Christmas songs that haven't been done to death, the band surprises some more with quite a lovely, orchestrated take on Harry Nilsson's Remember Christmas. Add in The Kink's Father Christmas, and a very metal version of Run Rudolph Run, and this is a very strong contender for Christmas album of the year.
Posted by Bob Mersereau at 3:36 PM