MUSIC REVIEW OF THE DAY: GORDON LIGHTFOOT - WAITING FOR YOU 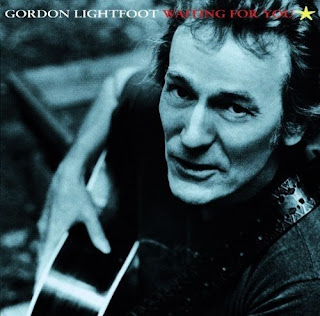 You know you've been at this for awhile when they start reissuing old albums, and you can remember reviewing it when it was brand new. This one came out first back in 1993, well past the time when Lightfoot had enjoyed hits on the chart, but not for lack of quality, more for changing times. I remember giving this a spin and immediately falling for its charms, from the sharp writing to the laid-back recording to the warm vocals. He had all his powers.

Opener Restless remains one of my favourite Lightfoot songs, as he explains that inner voice that won't let him settle, no matter whether he's out in his beloved nature, or at home in front of the tube. There aren't many writers who can reference the cry of a wild goose, the quietude of winter, and The Young and the Restless in one song. That restless spirit informs the rest of the album, as he reflects on his desire to keep moving, keep playing music. In Wild Strawberries, he admits he'd "play most anywhere if it would pay my rent/I'd be living on the downside in my old apartment." There's still room for a bad joke though; when he addresses the question of what it's like being in the spotlight on stage, he replies,"Let it now be known that throughout all of these years/I have been wearing -- polka dot underwear."

It's a solid collection of later Lightfoot songs, along with a rare cover, certainly an acknowledgement. Back in 1985, Bob Dylan had paid him a great public compliment, saying in the liner notes to the Biograph box set, "Everytime I hear a song of his, it's like I wish it would last forever." They'd been friends since the mid-60's, and Dylan had recently returned to fantastic writing with his 1989 album Oh Mercy. Here Lightfoot performs one of the best songs, Ring Them Bells, like it was made for him. Mostly it's an acoustic album, with a couple pf stronger numbers that stand out because of an out-of-date drum sound. That's about the only complaint here, Lightfoot produced himself back home in Toronto, a little on the quick and cheap, using synthesizer instead of real strings, and a few other glossy keyboards and echo effects. But it still holds up well, proof positive Lightfoot's glory days didn't end back in the '70's.
Posted by Bob Mersereau at 11:39 PM