MUSIC REVIEW OF THE DAY: DAVID BOWIE - A NEW CAREER IN A NEW TOWN 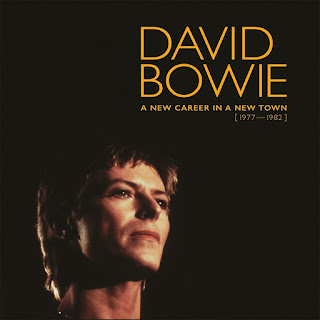 The big news that greeted the release of this box set wasn't about the fantastic music from this Bowie period (1977 - 1982) but rather an audio problem on one of the discs from the set. And we're not talking a huge problem either. At the 2'50 mark of perhaps the most loved song in the whole box, Heroes, there's a slight drop in volume. You had to have pretty good ears to pick it out in the first place, although once you know it's there, you'll always hear it, I guess. It was apparently some problem with the master tape that they tried to fix, but audio fans hated the result, and entire digital forests were felled to hold the online complaints, emails, posts and even whole columns devoted to the issue. Henry Rollins even told people to refuse to buy the set! Parlophone finally caved, and announced a replacement disc was forthcoming.

There were other complaints as well, most of them about the new mastering done for the albums, but those were more a matter of taste, again for the folks that can hear at dog frequency levels. I think I need to point out that the complainers already own copies of the originals, so just keep both, folks. Compare and contrast to your heart's content. You probably have at least five other copies of Heroes to play, with your original album, your CD, the version on the box set you own, and on the Best of set, you might have the picture disc single, and now this. Chill out. Enjoy the music.

I sure did. If you haven't been following, before he died Bowie embarked on a reissue program that would see all his catalogue, at least the main years from 1969 into the '80's, come out again in large box sets, a few new remixes where needed, and the various b-sides, edits and one-off recordings gathered together as well in the sets. This is the third, and sets off in '77 with the Low album, the first of the so-called Berlin Trilogy albums, named for where they were recorded. For many, it was a hugely disappointed album, an experimental set that was largely instrumental and very cold, with the use of electronics and synth. Since it was coming off a period that had seen Bowie break through in North America with big chart hits, including Young Americans, Fame and Golden Years, fans were hoping for more. The U.K. was hip to the sounds, and the album became hugely influential to the New Wave and post-punk groups soon to follow, but I can recall seeing lots of copies of Low in cut-out bins in K-Mart for $1.99, which is where I got mine. It took a lot longer on this side of the ocean to appreciate Low, Heroes and Lodger, and it really wasn't until the breakthrough video of Ashes To Ashes from 1980's Scary Monsters (and Super Creeps) album that more people started to get back into Bowie. That led to the huge return with Let's Dance in 1983, but that's another story.

So there's four studio albums (Low, Heroes, Lodger and Scary Monsters) here, plus the live set that came out after Heroes, Stage. But the way these boxes work is that if they make any changes, they include both the old and new versions. So for Stage, there are two complete copies, the original, and a newly-compiled set that adds a further five songs, and rearranges the track listing into the way the live show originally happened. I've always loved Stage, with its ultra-clean sound, the gleaming keyboards, and the surprising mini-set of Ziggy Stardust songs, which were so powerful next to the dreamy robotics of the Low/Heroes era. You have to love the extra cuts too, especially the inclusion of The Jean Genie, with amazing, and I mean amazing solos from Adrian Belew and violin player Simon House.

The next bonus disc is a completely new mix of the album Lodger. Producer Tony Visconti explains that he and Bowie always hated the original mix, which was done on the fly because of time concerns, in an under-equipped studio. So while Bowie was working on his final album, Blackstar, Visconti used some extra time to remix the album, with Bowie's permission and approval. And even with my limited abilities, yes, I can hear a difference, I hear the instruments clearer and with extra depth, and a few parts that I've never noticed. It's the go-to version now. There's also a four-track E.P. included, that holds the foreign language versions of Heroes, in French and German, plus edits. If you have a need to hear Bowie sign in German, it's of interest. Once.

Finally, there's the latest of what are called the RE:CALL albums, which collect all the associated single tracks not featured on albums during this time. For the most part, these are single edits of well-known tracks, so a shorter Heroes (again with the Heroes), a slightly longer Beauty and the Beast, etc. This is not very interesting stuff, and it's often hard to spot the difference without a stopwatch. Better is the inclusion of b-sides, like Crystal Japan, which was also used as a beverage commercial in Japan. There's an edit of Under Pressure, which was technically a Queen song with Bowie guesting, so it's a nice inclusion. Most important and rare is the remake of Space Oddity he did as a single cut to go along with Ashes to Ashes, the Major Tom sequel, which is quite hard to find on any Bowie sets. Also there's the single of Alabama Song, a Brecht/Weill number he did in concert, and became a surprise British hit in 1980. You also get the five cuts from the oft-released and largely uninteresting Baal E.P., another Brecht production. Finally, if you don't have it on some Christmas collection, it's the famous TV duet with Bing Crosby on Peace On Earth/Little Drummer Boy.

My beefs are about the content, not the sound, and it's these RE:CALL sets. All those single edits, so minor and repetitive, should just be tossed in favour of the many bonus tracks that were released years ago on the first series of Bowie reissues, done by Rykodisc. These have been out of print for years, and are much more important and desired. They're probably saving them for some other great Bowie box to come, but still, it's miserly. Yet the pros far outweigh all these complaints. The boxes are beautiful, whether on vinyl or CD. The books are very well done, with notes this time from Visconti on his involvement, including lots of insider stories. The graphics are exceptional, with rare photos and memorabilia, and it feels like a museum catalogue. I think Lodger is a tremendous album that needs to be discovered by the great crowds that ignored it, and I actually believe it's the crown jewel here. It beats Scary Monsters, as it has better songs (Monsters dies off on side two), and while Lodger wasn't as influential as Low and Heroes, it is a better full listen with its wild characters, eccentric rocking, and Bowie's most dramatic vocals. The song D.J. is a roller coaster ride on its own. Plus, it now really does sound better, even for the majority of us who would rarely notice audio quality.
Posted by Bob Mersereau at 11:17 PM