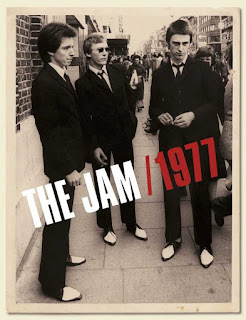 I know, there's a box set and a super deluxe edition for every bloody album these days, making us buy the same music we already own for three times the money. But I still love them, and they keep finding new ways to make them interesting. Here's a case in point. This box, with four CD's and a DVD, looks at one year in the life of The Jam, the pivotal one when the group's first two albums came out, and they burst onto the British scene. It includes newly remastered versions of those two albums, In The City and This Is The Modern World, a bunch of demos for their label preceding the first album, some appearances on the famed John Peel show, and a full live concert in their early glory. The DVD is made up of official videos, Top of the Pops and other TV broadcasts, and gloriously, an appearance on the short-lived Marc Bolan TV show, where the host introduces them as simply "Jam."

The Jam stood out from the punk bands of the day, and immediately became big hits in the U.K. They had lots of attitude, volume and spiky energy, but they were also nattily dressed, bringing back the whole Mod thing with their suits and ties, and they could really play well. The songs were strong, they acted professionally they were taking this very seriously. Right off the bat they sang about social issues and British society, Ray Davies lyrics, Who swagger, Clash punch and conscious.

There won't be anything new for fans on the regular albums, apart from the remastering and the inclusion of non-album singles All Around The World and Carnaby Street on In The City. The new stuff is on the other discs. Five of the demos have slipped out in other places, but this adds a further six and puts them all on one disc, most of the first album heard in raw form, along with live favourites So Sad About Us (The Who) and Slow Down (Larry Williams via The Beatles). The Peel Sessions have been around the block before, but the live concert is new, a great raw set that shows the band's powerhouse show of the day. Like the punks, they played fast and furious, and shoved out a bunch of short songs, numbers often clocking in under two minutes. Those favourite covers are here too, as well as popular soul numbers In The Midnight Hour and Sweet Soul Music, played pretty wild and crazy, a place to release a lot of energy for band and crowd, so maybe the message in the originals would sink home a little better.

Although there are five discs, you're not getting the full hour-plus that box sets usually deliver. The original two albums clock in at around the half-hour mark, and while they could have fit on one disc, I think it's right to stick to the integrity of the initial releases. The demos again whiz by, half an hour there as well. And on the DVD, 11 songs at that concert speed come in under the 30-minute mark. Only the Peel Sessions and live concert make it to the hour length. So really, this could have been three discs, but they more than make up for that with an expansive book, 148 pages that go through each month of the year with all the press reports taken from the British papers of the day, plus full historical and chart information, a really fun way to go through this box. There's also plenty of loving detail in the design elements, right down to the box interiors and disc jackets. It's not crazy pricey at $85 currently (Amazon pricing) and I think even the biggest fans will be impressed with the work that's gone into it, it all feels first-rate and indeed, deluxe.
Posted by Bob Mersereau at 9:47 PM