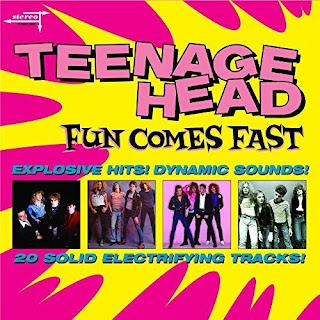 The mighty heroes of Hamilton finally get their due in this much-deserved collection, part-best of, part rarities. For most, Teenage Head were their first taste of Canadian punk, actually getting a real record deal in 1978. You could buy the records nationally, and with any luck even see them play. That was a big deal for the handful of punk fans in your home town, sore thumbs in between the disco, country and Skynyrd fans.

T. Head were always a little more melodic than basic punk, with the band loving everything from original rockabilly (the true first punks) to early '70's glam and garage. They were named after a Flaming Groovies song of course. But they did have the ultimate punk frontman in Frankie Venom, the real deal in life and onstage. Whatever he sang, you know he meant it, and lived it.

This curated 20-song look at the band's career to date includes most of their best-loved songs, along with track-by-track commentary. There are a few alternative versions of some early songs, using 45 versions or re-do's, takes that the band either like better, or presented for their rare appeal. However, there's a bump in the road concerning tracks off the second and third albums, Frantic City and Some Kinda Fun, as apparently a suitable licensing deal wasn't available. Instead, we get, for instance, Teenage Beer Drinking Party from the album Teenage Head with Marky Ramone instead of the original 1980 version. Now luckily, that was damn good too, and the live versions of songs from that period are also excellent, and great to have those concert examples. It does mean however that there are tracks that aren't here, including the hit single Somethin' On My Mind. There are probably fans happy about that though, as it was their biggest concession to pop music.

No problem after that though, as we get a good cross-section of further work over the years, including buried album tracks that shine, like 1996's My Mommies Pot. No, not that pot, a real pot for cooking, I kid you not. This has been a real labour of love for well over a decade for the band, one that has seen Frankie pass on, but the group continuing thanks to fans, friends and the support of Hamilton's close-knit music community. It's a bit of a nightmare trying to compile such a set with rights spread over several record labels, so having it come out as a solid effort is worth special congratulations. Plus, the group has been criminally hard-to-find for consumers, so now that's been put right.
Posted by Bob Mersereau at 9:19 AM