MUSIC REVIEW OF THE DAY: SHARON JONES & THE DAP-KINGS - SOUL OF A WOMAN 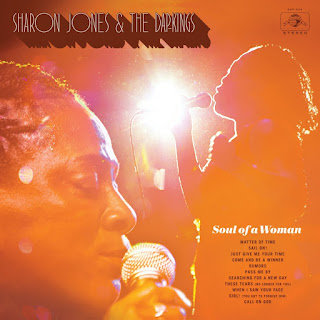 In the final couple of years of her life, despite fighting pancreatic cancer, Jones worked just as hard at her music as she had the decade before. That decade had seen her rise from obscurity to become one of the most celebrated modern soul artists and live performers around. Working with the retro crew at Daptone Records, Jones especially was responsible for bringing the genre back into the limelight.

Everybody obviously wanted this disc to mean something more, and to my ears, it's the best overall album Jones and the Dap-Kings made. From the big celebration of Matter Of Time to the slow burn of Just Give Me Your Time to the easy sizzle of Come And Be A Winner, the songs move from one groove to another. As the disc progresses, Jones and crew move into more orchestrated songs, allowing her to show off her smoother side, gliding alongside horns, strings and the rich backing vocals of Saun and Starr. For the finale, fittingly a gospel number is presented, one Jones wrote herself. Call On God is a return to the church, where soul music started, Jones letting us know where her heart and strength lay at the end.
Posted by Bob Mersereau at 11:09 PM