MUSIC NEWS OF THE DAY: CAVEBOY HOOKS UP ON RIA MAE/SCOTT HELMAN TOUR 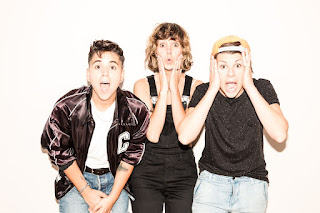 Montreal's Caveboy just jumped a level in the pecking order of up-and-coming Canadian bands. The trio was one of three acts selected as this year's Juno Master Class winners, by a jury featuring Lights, Kardinal Offishall, Max Kerman of Arkells and others. Essentially the group, along with co-winners Quake Matthews and Ivory Hours, have been judged Juno-ready.

It's an honour that has immediate results. The group has been added to some dates on the current Ria Mae/Scott Helman tour, a couple in Quebec, and two in the Maritimes, their first band trip to the East Coast. Lead singer, guitar and synth player Michelle Bensimon says the award is one that's taken seriously.

"Our name is being passed around now, and people are seeing it more and more," she said from Montreal, taking a break from rehearsals for the shows. "Hopefully that sparks something so when we try to make contacts in the near future, people will go, 'Oh I remember that name.' It's something that gets spread around in the Canadian music industry."

The group has just released its latest video and single, Raconteur, seen here, which features their unique mix of '80's synth, a bit of dance pop, and a definite dark edge as well. It's a combination that sets them apart.

"When I think about it, I wonder how did our brains come together and decide this was what we were going to do?," says Bensimon. "Because there was no real conversation of being like, 'Yeah, we want it to be super '80's or super dancey or super intense.' We just started writing together and this is what came out. It really is just a combination of the three of our brains."

Caveboy can trace its emergence back to an unlikely Genesis. "We were actually playing at my little sister's birthday party," says drummer Lana Cooney, of her first gig with bass/synth player Isabelle Banos. "When Isabelle and I got together to play music, it was for covers at first." That included anything from Metric to Pink Floyd.

The band formally came together when Bensimon, who had been living in Toronto, moved back to Montreal's West Island suburbs, where they all were from. "Michelle and I knew each other as kids, played soccer together, went to same elementary and high school," says Cooney. "Michelle moved back, jammed one time with us and never left."

While the recordings and videos have attracted attention, it's the live show they all feel is their biggest strength. "It's definitely a drug that we're addicted to," says Banos. "We come alive on stage. All of our energy goes into our live set, and making it as enjoyable and contagious for the audience, to just forget whatever's been going on that day and just be in the moment with us."

While the synths play a big role, the group is just as happy to switch to a guitar/bass/drums lineup, which lets them mine the dark '80's minor chord/punk rock element more. "Just all sorts of ways for our six hands to play these things," says Bensimon of the instrument switching.

Caveboy will be featured on the Helman/Mae dates starting in Montreal Saturday, Oct. 15, at L'Astral, then Monday at Salle Multi in Quebec City, Tuesday, Oct. 18 at Boyce Farmer's Market in Fredericton, and then Friday, Oct. 21 at the Charlottetown Beer Garden.
Posted by Bob Mersereau at 9:22 PM