MUSIC REVIEW OF THE DAY: THE REPLACEMENTS - FOR SALE: LIVE AT MAXWELL'S 1986 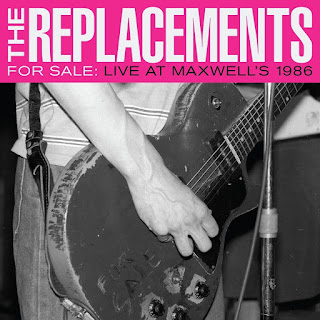 Oh those Replacements. Just when things were looking good, they'd screw it up on purpose. That was certainly the order of the day in the group's overall career, and the basic operating procedure for live shows as well. I saw them a couple of times, in front of larger crowds than they normally played for, opening for big stars (Petty, Costello), and both times they did absolutely nothing to impress potential new fans. Instead, they did stuff to amuse themselves and the small coterie of die-hards who had wandered down to the front to egg them on, switching instruments, spotting songs part-way through, etc.

Those live shows have always been the stuff of great stories shared among fans, or traded on bootlegs, as there was no official live album ever released by the group. Finally, this show sees the light of day, recorded back in 1986 for a potential live album, but stuck away when plans changed. Each show was a miniature version of their career. Just when a song or set was getting too close to professional, they'd get bored or sloppy or just make a well-timed mistake to let things go off the rails. Because they knew, and fans knew, they could be really good if they wanted, and make incredible power pop songs. But they knew it was actually better, more rock and roll, to be imperfect. That happens right off the bat here, when the second song, Color Me Impressed, gets messed up when it threatens to be too catchy. Soon after, a really good version of The Sweet's Fox On The Run is brought to a quick halt just when they were killin' it.

It was, and is still, so strange, how we still love them. Some of course just like their drunken sloppiness, but I have always thought the main appeal for the small but mighty fan club was that they could hear how amazing these songs would be if done by expert musicians. If Paul Westerberg's voice didn't crack and strain on those gorgeous melodies, he'd sound like Pete Ham from Badfinger. In other hands, songs like the then-current Kiss Me On The Bus from the Tim album might have had a shot on the Top 40. And although they came out of punk, they were mad for hooks, heard here as they go through a covers string near the end of the show, doing T. Rex's Baby Strange, the bubblegum hit Hitchin' A Ride by Vanity Fare, and Nowhere Man by the Fabs.

Any live album we would get at this point would be most welcome, but this happens to document an important time for the group. It's at the end of the original lineup, shortly before Bob Stinson was ousted for being too unruly even for them, and at the time when they were still capable of the punk abandon of their earliest material, along with the relatively sophisticated later Westerberg songs. And even with all the rough edges, this is a great listen. Color me impressed.
Posted by Bob Mersereau at 10:57 PM