MUSIC REVIEW OF THE DAY: KATHLEEN GOREY-MCSORLEY - MY MADNESS BROUGHT ME HERE 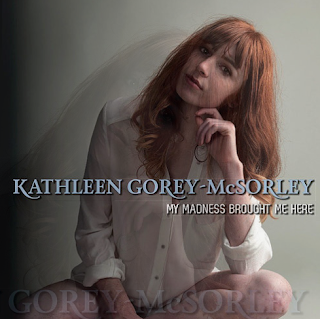 It's hard to change horses mid-stream, so it's wise New Brunswick's Kathleen Gorey-McSorley is doing it at a young age. An East Coast favourite while still in her early teens, she was following the traditional Celtic path as a fiddler, nominated for an ECMA in roots/traditional, touring festivals in the U.S, Europe and Ireland, and eventually going to school in the Emerald Island. But health issues led her to take a couple of years off to regroup and grow, and she's reemerged as a largely different performer.


She's still playing fiddle when it fits, but for the most part she's now working as a singer-songwriter, with piano and ukulele her other instruments, singing her own lyrics her focus. So while this isn't her debut, it's the debut of her roots-indie style. These go from upbeat uke songs such as Brianna, to some hard-won life lessons in thoughtful tracks such as Pamplona, having seen a lot and traveled a lot already in her young life. You can still hear a bit of her folk past in Drunk Words, just enough to set her apart from the rest of the pack brought up on Beyonce instead. In fact, she turned to veterans such as Toronto guitar whiz Kevin Breit and former Cockburn foil Fergus Marsh on bass to thicken up the songs, more with needed heft than any kind of alt-edge.


For those who do miss her fiddle, there's a bonus track, an extended take on Pamplona that sees her jamming, trading licks with Breit, and it's actually the most interesting move on the album. There's a groove that doesn't lose the contemporary feel the rest of the album has, and lets her put her fiddle back in this new setting, away from the Celtic. It may be a good way forward for her, finding more room for that instrument on which she still shines.
Posted by Bob Mersereau at 10:41 PM