MUSIC REVIEW OF THE DAY: THE GALPINES - TRUCK 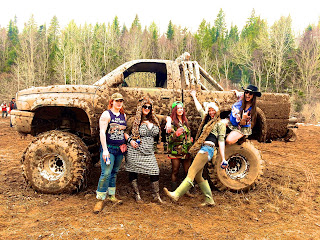 Rude, crude, lewd and loving it, Moncton's Galpines take everything one step further than you thought anyone would ever dare. This is the outrageous talk you laugh about, but would never say yourself, the kind that makes Trump's locker room look more like pre-school. And that's part of the point; make all those macho dicks do a double-take and hide before they get embarrassed.

As for the rest of the audience, they can simply have a whole lot of fun, if they don't mind a few (well, a lot) of F-bombs and S-bombs and P-bombs and C-bombs and even the occasional Q-bomb (if there is such a thing). The four Moncton women who make up the group were one of the hits at this past weekend's Music New Brunswick conference, winning Emerging Artist of the Year, this debut EP coming out last year.

Red neck culture is the target (not lower class, let's make the distinction), but rather those that can afford an expensive truck purely to "fuck shit up," as they sing on Truck. Drunk Tank is the big crowd favourite, the tale of one woman who goes out drinking, gets loaded and mean, beats up a guy, the cops come, she berates them and by 8 a.m. realizes that she's probably going to be late for work, since "I'm in the drunk tank." I'd call it a cautionary tale, but in truth, they'd do it all over again, and probably will.

There are five tracks on the EP, and the group is getting ready to record a full-length, with the songs already in the set list. That includes a true number aimed at a douche who threw a Tim's coffee cup out the car window at them, and the promise none of them will ever sleep with a litterbug. There's also a crowd-baiting tune about the world's number one problem, which is apparently the restrictive nature of pants, and how everyone should not have to wear them. The audience is instructed during this number to participate in the "pants-off dance-off" in front of the stage.

Intrigued? Not easily offended? The Galpines appear at Grimross Brewing Co. in Fredericton on Saturday, Oct. 21.
Posted by Bob Mersereau at 4:47 PM