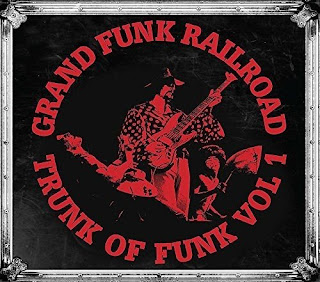 For a great big '70's band, one with an armload of gold and platinum albums and two #1 hits, Grand Funk Railroad don't get much respect these days. Actually, they didn't get much respect when they were topping the charts and filling the halls either. Important critics of the day hated them, and they've never overcome that. They're not in the Rock and Roll Hall of Fame, for instance, but I bet almost everybody knows "We're An American Band."

These stuffed boxed sets probably won't change that perception, but they'll please a particular era of hard rockin' fans when music first moved into hockey rinks. They are called Trunk of Funk Vol.1 and 2, and feature the first 12 of the group's albums, up to the time they were dying out. They include a batch of non-album cuts, unedited takes and live versions, beefing all the originals up to an hour or more in length. Funk fans will know there were two distinct eras for the group, the hard-driving, power trio heavy blues-rock start, and then the much cleaner, Top 40 era, when the band dropped the Railroad from the name, and added a keyboard player.

The earliest work hasn't dated all that well, with the group struggling to find their own voice in the Cream/Hendrix mode. What they add eventually was in the name all the time, a bit of funk and some basic boogie. They became big favourites live, and on the third album, Closer To Home, developed a rep for some heavy lyrics as well. An edited version of the title cut became their first radio hit, and fit in with the anti-Vietnam war movement. That mix of heaviness and party tunes took off with Live Album, which went double platinum in 1970. Two more albums followed in 1971, Survival and E Pluribus Funk, which featured the hit Footstompin' Music, which had the kids rockin'. All that hard work, six albums in three years, was paying off big-time. 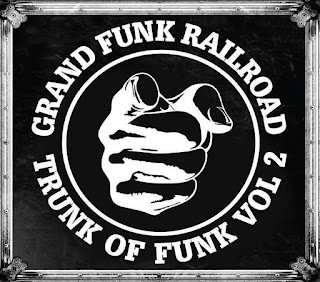 The band decided to go for a bigger sound by adding keyboardist Craig Frost at that time, but more importantly, they found out their longtime manager Terry Knight was taking most of their money, so he was let go. A new direction was called for, and in came a top gun in producer Todd Rundgren, for We're An American Band. Another changed was drummer Don Brewer's increased role. He sang that hit, which used to be the sole job of guitarist Mark Farner, and also was allowed to write several of the cuts, alone or with Farner. It was almost a whole new group. Some purists prefer the louder, looser version of the band, but really they were making better albums now, and that was reflected in the charts. Shinin' On brought them another huge success, and featured their surprise hit cover of the oldie The Loco-motion. Then came Some Kind Of Wonderful, and the excellent but soft rocker Bad Time.

But the group was disintegrating, and they had lost their core hard rock audience. Pop fans are more fickle, and when the ho-hum Born To Die in 1976 did just that, without any hits, the group was ready to wrap it up. That's where the second box ends, although interestingly they did regroup later that year for the chance to make a final album with Frank Zappa producing, which isn't included here and wouldn't add much anyway. Various reunions and even a couple of new albums were done in the '80's, and a version without Farner and Frost has kept touring, but the confusing history of the band has kept them from being remembered with the greats.
Posted by Bob Mersereau at 11:35 PM