MUSIC REVIEW OF THE DAY: WHEN PATSY CLINE WAS ... CRAZY (Blu-ray) 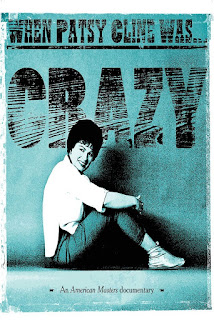 This is a Blu-ray edition of the American Masters program that aired on PBS in 2016, a look at Cline's too-brief life. What's amazing is how much she crammed into the time she was recording, from 1955 tohher death in 1963. The scope of the amazing music she made is enough to embarrass most artists, but as this documentary shows, it took amazing efforts from Cline all along the way to fight to the top.


There's so much to her story it took a herculean effort to cram it into the hour time the TV series allowed, so it's good there's another hour of bonus clips on the Blu-ray extras. The producers used a hodgepodge of material, old and new, to get at the true story, from archival footage, new interviews, and lots of old ones too. It's a odd batch of people who get to talk, but it works. There are stars such as Reba McIntyre and LeAnn Rimes, who know what Cline did for women country artists, but also more surprising ones such as Kacey Musgraves and Rhiannon Giddens. Somehow, Ricky Warwick of Thin Lizzy shows up too. Contemporaries Whispering Bill Anderson and Wanda Jackson are still about to talk about her, but they also use old clips from important voices such as her friend Dottie West and producer Owen Bradley. Cline's daughter is featured throughout, and so is her late husband Charlie Dick, luckily interviewed many times over the years. Willie Nelson wasn't available for a new interview, I guess, but they use a fine clip of him singing part of his composition Crazy. Along with all of those folks, there are a dozen historians, biographers, filmmakers and writers wading in with all the important points in her life.


Here's the skinny, and it's a roller coaster ride. She came from Depression-era poverty, loved to sing, hung around radio stations and clubs long enough to get noticed, and signed a very lousy record contract. By luck, she got the song Walkin' After Midnight, which landed her an appearance on the Arthur Godfrey show, and made it a huge hit. But that bad contract made it so she barely got any money from the hit, and then she was forced into recording a run of bad material because of that signature. She almost disappeared, and barely scratched out a living, but finally gained her freedom in 1960 and was able to get better songs. The very first one was I Fall To Pieces, and she had a second lease on life. Most of her hits happened in just over two years, and in the middle of that, she had a horrible car accident that left her on crutches and with scars on her forehead that she covered with wigs and scarves the rest of her career. She never got rich, toured constantly, stood up for her rights and those of lots of young women in the business, and became a legend for all those things, just as much as for her incredible voice.

Plus, she wore pants on the Grand Ole Opry stage.
Posted by Bob Mersereau at 8:49 PM