MUSIC REVIEW OF THE DAY: VAN MORRISON - ROLL WITH THE PUNCHES 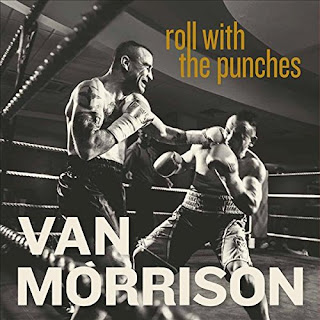 Call it the Working Van's Blues. This is a mostly covers album, featuring Morrison's favourite stuff, R'n'B from the '50's and '60's, with a little jazz and soul mixed in. There are five of his own cuts, but nothing that stands out. The real winners here come when he dives into classics such as Sam Cooke's Bring It On Home To Me, Bo Diddly's Ride On Josephine and a fine medley of Stormy Monday and Lonely Avenue.

He has some help too, some heavyweight guests. While most people bring on a star for a single track, Morrison lets his pals work on a bunch of songs. British hit vocalist Chris Farlowe, who has been touring with Morrison, appears as a second lead singer on several cuts. Another old friend who has often taken that role, Georgie Fame, is back, singing and playing his famed organ. The real big news though is the appearance of Jeff Beck, who takes leads on five cuts. His playing helps spice up a somewhat routine Morrison outing, although Van singing this stuff is always worth a listen.
Posted by Bob Mersereau at 10:28 PM