MUSIC REVIEW OF THE DAY: ANNE MURRAY - THE ULTIMATE COLLECTION 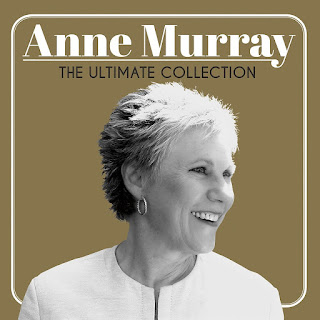 Haters are going to hate, but I have a lot of time for Murray, largely thanks to the recognition she gave to East Coast music, and the accomplishments she made for Canadian entertainers. Murray was a budding star in 1970, already known for success on the Halifax-made TV show Singalong Jubilee, when things got crazy. Her recording of fellow cast member Gene MacLellan's Snowbird became a huge worldwide hit, charting high on the pop, country and adult contemporary charts. It was the first gold record for a Canadian female artist in the U.S., and, get this, in 1971 was named the most-played song on the radio -- in the world. Yeah, pretty good for Springhill, N.S.

Along with Murray was a team of colleagues from back home whom Murray dubbed "the Maritime Mafia." It included MacLellan, producer Brian Ahern, Singalong host/producer Bill Langstroth (they would soon marry), her manager Leonard Rambeau and tons of the musicians. Their footprints were all over the Canadian music scene for years, especially Ahern, who went on to produce Emmylou Harris's first ten albums, and for many more artists. So that's a legacy that goes back to Anne, and her hits.

So,respect. As for this set, it's actually been awhile since a major Murray compilation, and not one since her retirement. She was completely involved in compiling the set, and it shows, as it is a thoughtful set that shows her many sides, especially if you opt for the 2-cd version instead of the basic one disc, all-hits set. Disc one has the obvious, including You Needed Me, A Love Song, You Won't See Me, Danny's Song, 20 chart hits in all. Disc two goes deeper, including several early Canada-only favourites such as Sing High, Sing Low, Robbie's Song For Jesus, and Cotton Jenny. There's a tip to her friend Glen Campbell, who signed her to a huge contract to appear on his U.S. TV show, helping make her a household name in the U.S. They recorded a duets album, and here we get a medley of I Say A Little Prayer/By The Time I Get To Phoenix. There are some of her many duets, including those with Emmylou, Bryan Adams and Michael Buble. Canadian artists especially have always loved to pay tribute to Murray by guesting with her.

There are a couple of live tracks as well, and Murray uses the opportunity to right a long-standing career beef. She includes a concert version of Put Your Hand In The Hand, a song she was the first to record. But the hit version in 1971 was by the then-unknown Toronto group Ocean, and it actually charted even higher that Snowbird. Murray is still mad about it, since it was a song MacLellan had given to her to record, but it languished as an album track. Capitol Records in the U.S. wouldn't put it out as a single, saying it wasn't the right sound for her. Oops.

Anne Murray was not a rock star, and never tried to be. She was caught a bit out of time, an old-school performer/crooner who more in common with the great pop '50's singers. She was so good, her talent couldn't be denied, and her songs stormed the charts and filled arenas, despite being called uncool. But the numbers don't lie, especially the numbers of fans, and there isn't a musician in Canada that doesn't owe her a debt.
Posted by Bob Mersereau at 10:49 PM