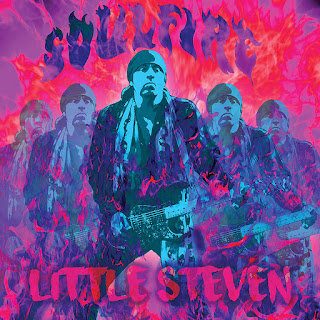 When this came out a few weeks back, I ignored it, thinking I'd been burned on Little Steven's solo stuff in the past and aside from the odd track, hadn't ever been inspired. That "Ain't gonna play Sun City," that rocked, but it's been awhile. But lots has changed for the Springsteen sideman in the past couple of decades, including his star turn as an actor (The Sopranos), and his long-running, much-appreciated satellite radio show featuring great garage rock. In the liner notes, he admits it had been too long since he got to be Little Steven, and this time, he came prepared with a bunch of absolute great tracks.


He's always been known as the soul of the E Street Band, and that's because at heart he's a '60's soul man, in love with horns, backing singers and big glorious radio singles. The cut I'm Coming Back says it all, with everything you'd ever hope from him. It sounds like a song that could have made The River or The Rising, one to punch your arm in the air and love forever. But there's lots more than the E Street sound. "I Saw The Light" is a blast of Top 40, with more great horns, and a Cherry, Cherry/Tommy James and the Shondells swagger.

It's not all new meat here; Van Zandt goes back to the '70's to pull out a couple of his best-ever tunes, that he originally gave to his comrades Southside Johnny and the Asbury Jukes when he produced their first albums. I Don't Want To Go Home was the title track of their debut, and Love On The Wrong Side Of Town was a rare co-write with Springsteen, here getting the big Steven production. He's even ready to have fun, giving us a classic bit of doo-wop on The City Weeps Tonight, and his voice sounds perhaps the best it ever has. The great thing about being proven wrong in your assumptions as a reviewer and listener is that you're left with an excellent disc in return.
Posted by Bob Mersereau at 8:19 PM