MUSIC REVIEW OF THE DAY: KIM STOCKWOOD - SOMETIMES THE MOON 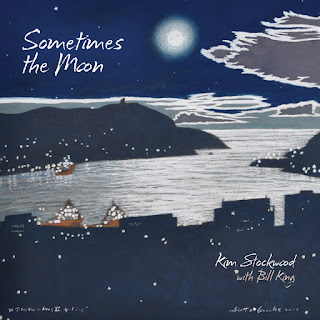 Known for her big personality and fun songwriting (Jerk, 12 Years Old), Stockwood has become a strong song interpreter in the last few years, at least on the rare occasions she steps forward with a new release. Her last one out, 2011's Back To The Water was a tribute to her Newfoundland home. This one started out as a selection of jazz-flavoured vocals, but a couple of other numbers popped up, making it simply a set of six enjoyable tunes, old and new, jazz, country and folk.

The big news here is a never-released song written by Ron Hynes, Sometimes The Moon. It dates back to the '90's, when Hynes and Stockwood met for the first time. He asked her to sing on a demo of it, and over the years their friendship grew, Stockwood describing him as a mentor. Her versions of his St. John's Waltz and Atlantic Blue from Back To The Water are among the best covers of his work. After his passing, Stockwood felt it appropriate to put that song on the collection, and even was able to use his guitar playing, from a recording of one of the many times the pair performed it live.

You can hear the the genesis of the standards project in other tracks, produced with pianist Bill King, who's worked with everyone from Janis Joplin to Linda Ronstadt to The Pointer Sisters, a stalwart of the Canadian jazz scene as well. His piano and her voice are the dominate instruments here, both digging into the emotion of these cuts. Stockwood's choices are surprising and charming, from a lesser-known Patsy Cline gem, Imagine That, to the Frank Sinatra oldie I'll Never Smile Again, written by Canadian Ruth Lowe, to the wartime heart-tugger We'll Meet Again. It's like walking into that perfect hotel bar fifty years ago, with the singer who feels your pain and lifts you up again. Not the Kim Stockwood you were expecting, then.
Posted by Bob Mersereau at 9:18 PM