MUSIC REVIEW OF THE DAY: THE DOORS - THE SINGLES 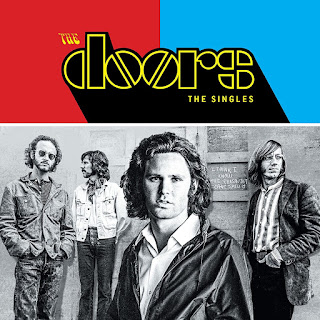 There's been an ongoing celebration and reissue series this year to mark the 50th anniversary of the recording debut of The Doors, including the pre-fame live album London Fog, a deluxe version of the self-titled Doors album, with another live show added, an upcoming deluxe version of the Strange Days set, and this double CD. It includes every a- and b-side from each 45 the group released, including the hard-to-find mono radio versions from back in the day. There are also three b-sides that weren't on any of the original albums, although they have been added to various collections and reissues in the CD era.

The Doors lived and died on their singles, surprising for a major act of the late '60's, but they really were a group with a big teenage following. The huge, #1 success of Light My Fire put them on the map, and for more than a year they kept pounding the charts with People Are Strange, Love Me Two Times, The Unknown Solider, Hello I Love You and Touch Me. But 1969 and 1970 were tough years for the group, as Jim Morrison's stage antics brought them legal problems and little radio support. It didn't help that songs such as Wishful Sinful, Tell All The People and You Make Me Real weren't actually very good choices as singles, and the future classic Roadhouse Blues was oddly relegated to a b-side. The band's fortunes were on the rise again in 1971 with the L.A. Woman album, and the hit single Love Her Madly. Riders On The Storm was also climbing the charts when the news of Morrison's death came from Paris, ensuring it would be a hit.

That's disc one, and there's still an hour to go. First, there are five singles from the post-Morrison doors, when the remaining trio tried to keep things going, to zero interest from the public. Those two albums (Other Voices, Full Circle) have never been considered anything but a mistake, and it was an awfully big legacy to live up to. Ray Manzarek certainly wasn't much of a singer, and at best you could say the group took on a kind of Band vibe, along with the blues edge they'd been developing at the end of the Morrison years. I listened dutifully, but can't say I feel the need to return. Then comes a return to better days, a live Roadhouse Blues that was lifted as a single from the An American Prayer posthumous set, the one with Morrison reading poetry over new instrumental bits by the group, released in 1978. A bit of that is heard as the included b-side, Morrison reading over Albinoni: Adagio. The 1983 live album Alive, She Cried, was better, and so is the single here, Gloria/Moonlight Drive, the latter with a particularly effective slide guitar solo from Robby Krieger. The disc is rounded off by four mono versions of original singles, none of them on CD before, including Hello, I Love You and Touch Me. These are pretty punchy mixes, and good to have.

As a collection, it's not the best way to get an overview of The Doors, as it misses some key album cuts, such as The End and Alabama Song, so the still-available Very Best Of, or the venerable Weird Scenes Inside The Gold Mine might be better choices for the newcomer. However, Doors fans will get a different perspective by following the trail of singles here, and pick up a handful of rarities as well.
Posted by Bob Mersereau at 7:04 PM