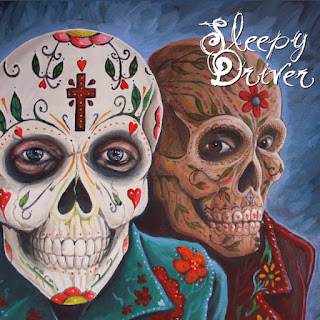 Fredericton's Sleepy Driver doesn't play live nearly enough (day jobs) but thankfully does release albums every couple of years or so, when singer/writer unleashes his latest bunch of cuts. This time out, it's his catchiest batch yet, with a focus on feeling good, and rocking out. Given Hicks' more serious, and often striking dark numbers from past albums, this seems to have been a conscious decision, and one that works well. Despite the title, Sugar Skull has a great mood to it all the way through.

The other five band members get plenty of time to show off too, from the harder rock side of the title cut, with its guitar and electric piano leads, to the plentiful pedal steel on several tracks from Dave Palmer. Believe/Belong is the only darker number, only because it's meditative, but for the rest of the set fun, either country-rock or straight-ahead rockers, the best of which is Radio Dial, with lots of NYC punk brashness. The albums out now, but the launch shows won't happen until Nov. 24 and 25 at the Charlotte St. Arts Centre in Fredericton.
Posted by Bob Mersereau at 10:39 PM