MUSIC REVIEW OF THE DAY: ALAN DOYLE - A WEEK AT THE WAREHOUSE 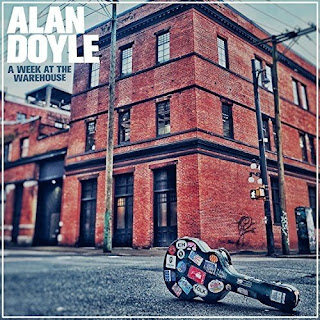 As the folks who have been coming out to his shows know, Alan Doyle has put together an awesome touring group, known as The Beautiful Band. On his latest, they are an equal part of the excitement, as the group pulled in on tour to Vancouver's Warehouse Studio, under the guidance of famed producer Bob Rock. To give full credit, the band is Kendel Carson on fiddle, Shehab Illyas on bass, Todd Lumley on keys, drummer Kris MacFarlane, and Cory Tetford on guitar.

The group's impressive energy is all over the insanely catchy Summer Summer Night, with Carson's fiddle leaping out of the chorus. Come Out With Me is a great opener, basically a song that says a good time will be had by all. The band can do it soft too, and Doyle's become quite a ballad singer, able to turn the party down for a love song like Fall.

The modern Newfoundland sound that Doyle helped popularize with Great Big Sea is still part of the show, with Bully Boys the big sea shanty here, with Lumley bringing the accordion out for the romp. Geoffrey Kelly from Spirit of the West lends his Celtic talents on whistle to Forever Light Will Shine to give it that flare. But really, this is a great big mix of styles that Doyle and the Beautiful Band do, more about that energy and positive vibe, and Doyle's personality. This album really captures what the band's live show is all about.
Posted by Bob Mersereau at 11:51 AM