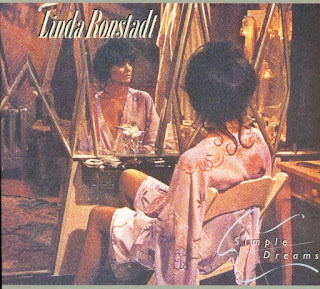 Ronstadt's biggest album from the '70's gets a 40th reissue, although a little subdued compared to others. It's upgraded with just three bonus cuts, all live versions of big favourites, and a brief new liner note from producer Peter Asher. However, it's a good reminder of just how fantastic a vocalist she was at this point, with so much power and perfect tone. If you tried to put auto-tuning on her, the machine would just shrug and turn itself off.

Of course she got lots of flak for being too commercial, and smoothing the edge off the rock songs and writers she favoured. But place her Tumbling Dice beside the Stones, and while the guitars may not have the same grit, she matches or even passes Mick's vocals. She was Warren Zevon's best friend as well, giving him a much bigger audience, and here doing fine versions of Carmelita and Poor Poor Pitiful Me.

Her hit cover of Buddy Holly's It's So Easy was a radical remake, adding guts to the track, but maybe what bugs people is that cowbell. I'm starting to think Asher's more to blame for the overly-commercial moments. But certainly you can't fault her version of Blue Bayou, where she does successfully tackles the operatic Orbison hit. She knew how to pick 'em and deliver 'em.

Oh, and about those bonus cuts, they are actually great versions of It's So Easy, Blue Bayou and Poor Poor Pitiful Me. Her control live is just as impressive as on record, and led me to check on other live material. She's one of the very few stars of that era that didn't release a live album, which is crazy considering how well they sold then (Frampton, Eagles, Mac, etc.). That's what I'd like to see next.
Posted by Bob Mersereau at 6:51 PM