MUSIC REVIEW OF THE DAY: THE ORIGINAL BLUES BROTHERS BAND - THE LAST SHADE OF BLUE BEFORE BLACK 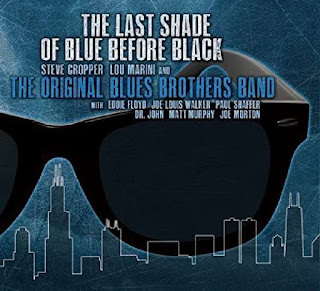 Original these days means the group is fronted by sax player Blue Lou Marini and guitar great Steve Cropper, both from the first incarnation of the band, as seen in the famous first film. While the rest of the current players may not be household names, as a recording act they have put together a first-rate set in much the same musical spirit. Plus, there are a bunch of guest players and singers featured that have ties as well, including Paul "The Shiv" Shaffer, the original band leader from his time at Saturday Night Live with Belushi and Ackroyd. The only reason he wasn't in the movie was that he had committed to working on Gilda Radner's stage show at the same time the filming was scheduled. Here, Shaffer does his famous James Brown impersonation on Sex Machine.

That's pretty much the vibe here, good times and plenty of guest solos. Tom Malone, another original does some trumpet work, and Matt "Guitar" Murphy adds a lengthy solo on another cut. Dr. John takes lead vocals on one of his oldies, Qualified, and Eddie Floyd does the same on a song he wrote with Cropper back in the Stax Records days, On A Saturday Night. Even without the guest power, there's plenty to enjoy from the group's own trio of vocalists, Bobby Harden, Tommy McDonnell and Rob Paparozzi, and with seasoned band vets including SNL regular Leon Pendarvis on organ, all the performances are grade A. In film terms, this album is a lot more like the first movie than the regrettable second.
Posted by Bob Mersereau at 10:31 PM