MUSIC REVIEW OF THE DAY: JULIAN FAUTH - THE WEAK AND THE WICKED 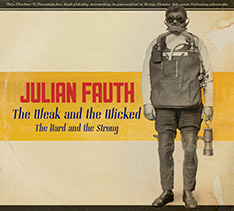 Blues and boogie-woogie piano man Fauth doesn't record nearly enough for those who love his unique style. This is the first for the Juno-winner since 2012's Everybody Ought To Teach A Stranger Right. It's his most straightforward and simple release, mostly played solo, and mostly classic blues and folks songs. These are the heroes and villains and sad cases we've all heard of our whole lives, but somehow Fauth makes their stories fresh. Casey Jones, Frankie and Johnny, John Henry, it's like we're getting the real story behind these legends.

Fauth has found some different versions of the lyrics (Frankie gets away with the murder in this one, for instance) but it's mostly Fauth's delivery and arrangements that bring the songs to new life. With his foot tapping like a metronome, his rolling piano is barrelhouse, Bourbon Street and front parlour all at once, always at a relaxed but somewhat fast tempo, given the songs a feeling of urgency. He adds a bit of organ on top of some sadder songs, some harmonica on some of the folk numbers such as John Henry, and some spare guitar, trumpet and percussion on others. Meanwhile, he's spinning the tales in a relaxed voice, as comfortable as a barber chatting to his Saturday morning customers.

Fauth has given us more original tunes on previous albums, and even though the theme here was classic folk heroes and anti-heroes, he did have three originals that fit the bill. And wouldn't you know, they slide in well right between the well-known ones, with only the language giving them away. Dan was about a Canadian soldier off to Afghanistan, and except for singing about Kandahar, it could have taken place in Gettysburg or Ypres. So Far Down is a true story of someone who saw the horrors of WW 2, forever troubled, close to Fauth later in life. The big surprise though, after hearing The House Carpenter and Betty & Dupree and the others, is his remake of a later student of the same classic material, Dylan, and his Blowin' In The Wind. Here, it has a gospel-flavoured ragtime stroll, easy-going, and totally unlike anyone else's cover. It's actually hopeful, suggesting if we pick up on what the wind is blowing our way, we may find a couple of good suggestions for what ails us. Like everything else here, Fauth fills an old favourite with a breathe of fresh air.
Posted by Bob Mersereau at 2:38 PM