MUSIC REVIEW OF THE DAY: MAX WEBSTER - THE PARTY 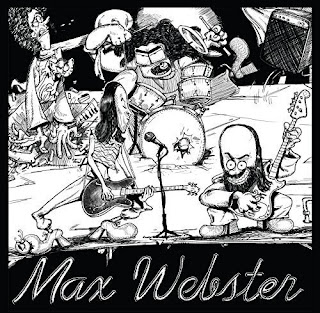 Bigger than a cult band, Max Webster was more of a religion in the late '70's, and still is, especially for its many Ontario fans. Led by the over-the-top dresser and flashy guitar whiz Kim Mitchell, the group balanced off glam, prog, metal and were way ahead of the game on the synth sound too. Then there was the mysterious fifth member, Pye Dubois, the Bernie Taupin of the operation, supplying a remarkably wide range of lyrics, from political to eccentric.

This boxed set is a rare beast in Canadian music, but very welcome. It collects the entire album output of the band, all spruced up in brand-new remastered sound. It kicks butt over any other reissue of the group's work, and was lovingly done with Mitchell's involvement. Along with the five original studio albums, the much-loved Live Magnetic Air is added, as well as the long-out-of-print first Kim Mitchell solo work, a five-track EP from 1982. The final of the eight discs is a completely-new collection called The Bootleg, which features a grab-bag of previously unreleased cuts, from live recordings to five finished cuts, including the awesome Deep Dive, a version of which was first heard on Mitchell's solo album I Am A Wild Party. It's a bright move, sticking the fun new stuff on one disc, and leaving the originals just as they were, without bonus cuts changing that listening experience.

The thing about Webster is either you loved them or didn't bother with them, and hopefully a few more folks will pick up on them with this set. The band has a reputation as a guitar-heavy outfit, and sometimes they did get a little too cranked up. Plus, in those days, Mitchell's vocals weren't pushed to the front, which was too bad, since Dubois' lyrics were always a highlight, as was proved in Mitchell's '80's parade of solo hits. And even though Rush were big fans, appeared on one album, were label mates, and made Max their favourite opening act, it was a bit of a mixed blessing, as it solidified the group's rep as a harder rock band. But there is plenty to enjoy in closer listens, especially on the most-beloved High Class In Borrowed Shoes, with the quirky Diamonds Diamonds, and the protest of Oh War!, calling out the profiteers. Even a sensitive soul such as Ron Sexsmith has professed his fondness for that album.

One glaring negative is the absolutely crappy packaging on the CD box set, which comes in a flimsy outer box, and includes no booklet or notes other than those from the original album covers. It's probably to keep the cost down, but it's still going for $90, which ain't giving it away. The vinyl box on the other hand gets the nice book and poster, so you'll have to shell out twice as much for that. I'm not keen on the black-and-white cover either. But I'm thrilled that the work has been done on remastering, getting the bonus cuts, and doing a full set of the band's albums, and hopefully some other Canadian heritage bands will get similar sets.
Posted by Bob Mersereau at 1:36 AM