MUSIC REVIEW OF THE DAY: MO KENNEY - THE DETAILS 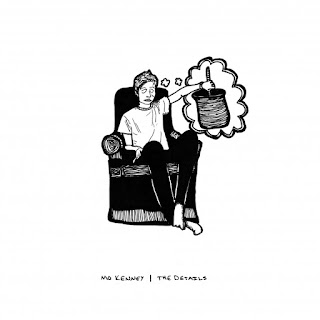 When Nova Scotia's Mo Kenney first appeared on around seven years ago, she was a young singer-songwriter finding her way. Two albums of largely acoustic guitar pop showed her to be a writer of rich, thoughtful lyrics, with a sharp eye and an equally sharp wit. With producer Joel Plaskett alongside, you could feel her willing try it all out, and learn new tricks at every turn.

After the second album, In My Dreams, Kenney went from touring as an acoustic opening act to headlining clubs with her own band, returning to electric guitar where she started out as a kid. She wanted to get loud, and work some stuff out. This album, she's stated, deals with her depression, problems with alcohol (she's quit drinking since), and a break-up we hear about at the start. But if you're expecting something bleak, the opener is as disarming as could be; it's a brief, 35-second cut, as oddball as can be, called Cat's Not A Cake, where she imagines the cat having to be split in the separation, and the other person trying to take the bigger piece.

There are several smaller cuts like that on The Details, the title cut as short as 28 seconds, a couple more under two minutes, many of the songs between two and three minutes, and only two above that, 3:36 for the longest. It makes for a cohesive listen, a true album of songs, her co-producer Plaskett as always the master at using a device to glue together a group of songs. It also allows her to bounce all over the place musically, and keep surprising us with short bursts.

The biggest revelation is how great Kenney rocks. On The Roof is wildly catchy, with searing guitar, and her own brilliant harmonies. June 3rd is a more dreamy, with clouds of vocals, which let the guitar go into a psychedelic transistion to the next track, Maybe I Am. That one's an updated '60's number, with more tortured guitar and some of that old Halifax Pop Explosion magic. If You're Not Dead is gutsier, a piece of bravado with a punchy chorus, while Unglued is another gorgeous melody, where she enters Aimee Mann territory, a comparison loaded with praise.

The album might have been born from difficult times, but it sounds fresh and uplifting throughout. It does end on a positive note lyrically, with Feelin' Good, the end of that journey for Kenney, but it's the beginning of a whole new approach for her musically that is already exciting.
Posted by Bob Mersereau at 11:26 PM