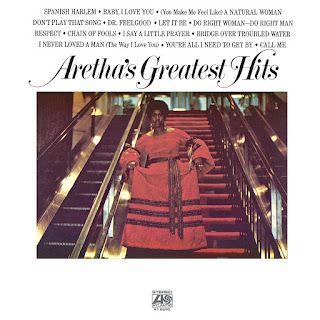 Oh, it makes me so mad. Thanks to today's strict playlists, younger generations know who the superstars of the past are, but they don't know much more than one or two songs by most of them. Case in point, the Queen of Soul. Everybody knows Respect, and lots of people remember Think, thanks to that classic turn in The Blues Brothers movie. Recently, her amazing performance of (You Make Me Feel Like) A Natural Woman at the Kennedy Center Honors for Carole King has brought that to a whole new audience. But ask most people to go further than that, and it's a challenge.


Yet we call her the Queen because of an incredible run of hits that started in 1967, when she switched to Atlantic Records, and the production team of Jerry Wexler, Tom Dowd and Arif Mardin set her back down south with some incredible musicians and material, starting with I Never Loved A Man (The Way I Love You). Finally playing with a great team and the right songs, Aretha ran up a string of non-stop, stunning performances, both on 45s and on special albums such as Amazing Grace, a Top 10, double-platinum live set of gospel songs in a church. Her interpretations of the classic songs of the day, whether the hits of The Beatles or Simon and Garfunkel, featured completely different arrangements, proving over and over his ability to find the great truths and soulful moments inside every song.


This collection, now reissued on vinyl, came out in 1971, and was especially generous, for the times. Instead of the usual 10 or 12 cuts, it had 14, and even then, couldn't keep up with all the hits she had in those four glorious years since '67. Since she was putting out a single every three months, and every one was a smash, it was case of too much for one album to handle. Just to show the embarrassment of riches, Think, a Top 10 hit, isn't here. Neither is (Sweet Sweet Baby) Since You've Been Gone, The House That Jack Built, and See Saw. All Top 10 hits. All from 1968 alone! In total, there were 29 chart hits in that time (and another in England), from which they could pull the 14, and 1972 started right away with Day Dreaming, a #5 hit and one of my all-time favourites.


So, as you can just imagine, here's a brilliant collection of songs, sounding great on vinyl, and this is why she's the Queen.
Posted by Bob Mersereau at 9:02 PM