MUSIC REVIEW OF THE DAY: CLAIRE LYNCH - NORTH BY SOUTH 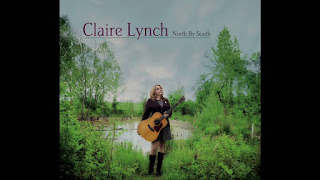 I've been a fan of bluegrass singer Claire Lynch for a long time, and it turns out I'm not the only Canadian. A while back, a fan in Toronto wrote her, saying she should play up here sometime. That turned into a continuing conversation about Canadian music and songwriters, and the fan got to introduce Lynch to some of the wide variety of great writers that fit in with her style of performing.


It must have seemed like a well of discovery, and a glorious opportunity. Lynch has responded with a full album of songs written by Canadians. While bluegrass isn't that huge in this country, there are many folk and singer/songwriter musicians who easily fall in the fold when the border is opened. The album starts with a Ron Sexsmith cut, not a very well-known one, Cold Hearted Wind from his 2006 Time Being album, a breezy track that features the giant of the dobro, Jerry Douglas.


Lynch continues going to surprising places for the songs, choosing another deep album track from Gordon Lightfoot, It's Worth Believin' from Old Dan's Records. Somebody tipped her to the East Coast, with a cut from Old Man Luedecke, Kingdom Come, and our banjo hero will be pretty pleased to hear none other than Bela Fleck take over the five-string on this version. There's also a superior tune from J.P. Cormier, the sad sea tale of the Molly May. Ottawa's Lynn Miles is a perfect choice, and her weary Black Flowers is excellent for Lynch's voice. The best-known cut here closes the album, and Lynch adds wonderful harmonies to Bruce Cockburn's Canuck classic, All The Diamonds In The World.


Tantalizingly, Lynch gives a nod to several other writers in the liner notes, other ones there just wasn't room for, including Ron Hynes, Dave Gunning, Stephen Fearing, Stan Rogers, Jimmy Rankin, Gene MacLellan, and on and on. Could a second collection be coming? There's reason to think it may. Remember that fan, who talked up Canada to her in the first place? Lynch ended up marrying him. That's some fan appreciation.
Posted by Bob Mersereau at 9:15 PM