MUSIC REVIEW OF THE DAY: LITTLE FEAT - AS TIME GOES BY (LP) 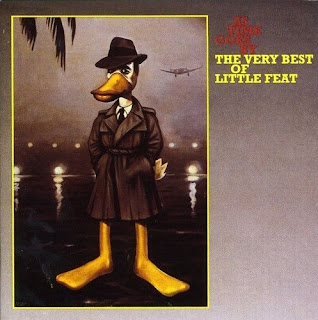 Here's another big benefit of the rebirth of vinyl; classic overseas collections are being reissued as well, and sent this way. The contractual and marketing concerns of record labels have faded over time for some of these sets, so nobody is trying to control what gets released where, when it comes to greatest hits. Case in point, this excellent best-of for Little Feat released back in 1986 in Europe.


Although I've seen this imported tons over the years, it's the first time it's been available on LP that I can discover in North America. It's just what you want from the great 70s band, all the biggies, from the Lowell George-led days. Dixie Chicken, of course, Sailin' Shoes, Willin' , Rock 'n' Roll Doctor, All That You Dream, Spanish Moon, Feats Don't Fail Me Now, etc. You could debate a couple of tracks along the way, and be absolutely outraged that Fat Man in the Bathtub isn't here, while they included the weak 20 Million Things from George's solo album, but it's pretty close to perfect.


Oddly, there's never been a really good best-of for the band in North America. There are good big compilations, notably the retrospective/rare cuts set Hoy-Hoy! and the box, Hotcakes and Outtakes, but the 2006 CD The Best Of was scattershot and wanting, with too many post-Lowell cuts for a single disc. With this, on vinyl no less, I'm very satisfied, and it will cut a ton of plays.
Posted by Bob Mersereau at 8:17 PM