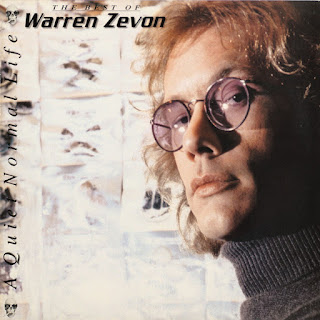 
Anyway, I guess you have to live it order to write a song like I'll Sleep When I'm Dead, and Zevon was, during his 70s - 80s period, the ultimate chronicler of the dark side. Here was a guy who sang "I'd rather feel bad than feel nothing at all." Of course, much of it was tongue-in-cheek, for our amusement, including Werewolves of London, Roland the Headless Thompson Gunner, and Poor Poor Pitiful Me ("She really worked me over good, she was a credit to her gender"). Lawyers, Guns and Money came from a true story, not quite as dramatic, but still, he knew how to have adventures and turn them into great stories.


But there wasn't much laughing in Play It All Night Long. If Alabama thought they got a bad rap from Neil Young, Zevon took it further: "Sweet Home Alabama, play that dead band's song/Turn those speakers up full blast, play it all night long." Later in his career, Zevon became known for tender, romantic tracks (oh, the irony), and those are here too, just overshadowed by the humour and violence and such. Bob Dylan sure noticed Accidentally Like A Martyr, naming a whole album after a single line, "Time out of mind."


As you can tell, I love quoting Zevon, and every song had one, two, 10 amazing lines. In Desperadoes Under The Eaves, there's this killer verse: "And if California slides into the ocean, as the mystics and statistics say it will/I predict this motel will be standing until I pay my bill." This greatest hits album has long been a favourite even of fans who own all the records, simply because it is non-stop perfect, from start to finish. Another great return to vinyl, and goodness, doesn't Waddy Wachtel's guitar and Zevon's piano shine through in good old analog?
Posted by Bob Mersereau at 8:26 PM