MUSIC REVIEW OF THE DAY: HELLO DELAWARE - MY MISTAKE 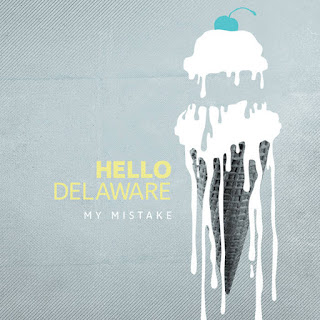 Last year, former singer/songwriter Dana Beeler of Halifax pulled a u-turn and got off the country/bluegrass road she'd been traveling, and instead embraced some inner oomph. Reemerging with a band she dubbed Hello Delaware, Beeler grabbed an electric guitar and vented a lot of anger, directed at some manipulators and fools, your basic lousy boyfriends among them, including one horrific break-up in particular.


Now, this would certainly give license to really thrash away loud and crazy, and there's some YouTube evidence of that, but Beeler is also one fine song-crafter, as shown on her 2012 debut, while she was still in that earlier phase. So instead of totally punking out (which would have been kinda cool too), she took the high craft route, and went into Daniel (Jenn Grant, Gabrielle Papillon) Ledwell's studio for all that magic that happens there. The pair came up with lots of dynamics, hooks and enjoyable complications, all the while keeping the pissed-up factor intact.


My Mistake is centered around a plucky electric piano, and a punchy rhythm, something to dance to, with a screw you, Loretta Lynn lyric. We Were The Ocean is funky, fun and summery, sounding like the product of somebody who has embraced having a good time after living through some lousy ones. Black Cherries is the chippiest track, all angles and anger, but cushioned by a chorus that couldn't be more catchy. What works best of all is that Beeler's voice is right up front, as she's a dynamic singer, with lots of punch and sweetness combined. She might have been angry while writing them, but the songs make me very happy.


Hello Delaware launches the new album Friday, Sept. 30 at The Seahorse in Halifax.
Posted by Bob Mersereau at 10:49 PM