MUSIC REVIEW OF THE DAY: ORIGINAL SOUNDTRACK - THE MAN WHO FELL TO EARTH 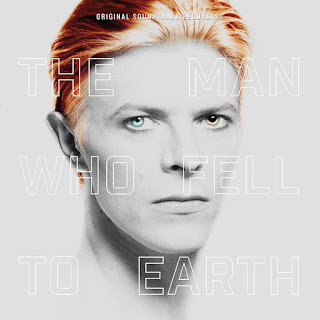 Like all things Bowie, his most-admired movie, the 1976 cult film The Man Who Fell To Earth, is getting a grand new reissue, with an upgraded special edition coming Nov. 1. First though, is the the soundtrack album, which has never been released before because of the usual contract muddle. So 40 years later, they've cleared that up and about 90 minutes of music is now available, on this two-disc set.


Now, let's clear up what this isn't: There's no Bowie. Nothing, no movie music, no old hits as used in the film He's an actor only, and that's why his face is on the set, he has the lead role. He was originally supposed to provide the soundtrack, but once again, it was those old contractual difficulties in the way. Bowie, a movie about a stranded, alcoholic alien, it would have been great. We know it probably was, as the cover of his next album, Station To Station, used a still of the movie and included at least one awesome song inspired partially by the script, TVC 15.


Without Bowie, the soundtrack fell to another star, former Papa, John Phillips. He did what is supposed to be done in movies, and came up with music for the scenes, to fit the visual cues. This was a combination of existing music, and score segments composed by Phillips. He put together a studio group to record everything from some jazz-influenced sections to mock-country stuff, the players including Stone Mick Taylor. There's even a zippy little instrumental version of Rickie Nelson's Hello Mary Lou.


The collection is more dominated by the six selections from Japanese percussionist Stomu Yamashta. These weren't written for the film, but the airy, unique instrumentals have an undeniable presence, with their fusion of traditional Japanese and prog rock and jazz of the day.


All together, it's a varied and striking set, going from the Yamashta breeziness to the Phillips novelty numbers, and the occasional vocal piece, such as Louis Armstrong doing Blueberry Hill. It's surprisingly effective and listenable, but again, there's no Bowie, got it?
Posted by Bob Mersereau at 9:23 PM