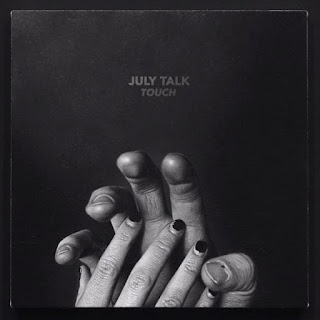 It's always a bit of a shock to hear Peter Dreimanis sing when it's been a while, with his horror movie growl, Tom Waits on the set of A Nightmare On Elm Street. Then it's such a relief when Leah Fay takes over, an angel appearing to take us back to the sweet music. But which one is the real devil here? Dreimanis may sound evil, but Fay puts him on the defensive through much of their material, fraught with tension and a lot of 21st century questions about relationships, desire and modern love.


There are cameras in bedrooms, strangers in the morning light, role-playing couples, voyeurs, and exes tumbling back to each other. Everybody is confused, and no wonder we're all listening on pins and needles; this is serious stuff, when the senses are so electric you both could explode.


Dreimanis and Fay are great actors in these roles, and the rest of the band concoct these dark, edgy songs, equally responsible for all the high drama in each number. With this, the group's second full release, they've perfected this scary/sexy/catchy blend.
Posted by Bob Mersereau at 9:10 PM