MUSIC REVIEW OF THE DAY: THE HOLLIES - BUTTERFLY (LP) 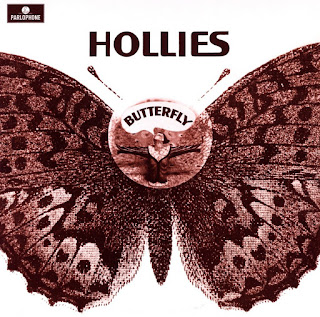 The second of two albums released by The Hollies in 1967, and the second reissued on vinyl this summer, as a double album, the first copy in mono, the second in stereo. And actually this is the first time this album has been issued in Canada, as we got a totally different package first time out. It had a different cover, different title, and different track listing. While the British label still followed that practice of leaving singles off the albums, in North America, that was the standard, so this was named after two of them, bearing the unwieldy title Dear Eloise/King Midas In Reverse. And indeed that first song, just an album track in the U.K., was released as a 45, becoming a pretty decent Top 40 Canadian hit.


This was the last album featuring founding member Graham Nash, who had been in a struggle with the band and management over the band's direction for the past year. He saw the writing on wall, knew albums were where it was at, and doing all those cute singles wouldn't cut it much more. He got his way for awhile, and like its predecessor, Butterfly featured no outside material, at attempt to show the band was serious and hip. Nash's role had been increased, handling more writing and lead vocals, but the transition was rocky. The hits were drying up, and King Midas, one of their very best, was a huge failure in England. Pretty soon Nash was over in L.A. hanging out at Mama Cass's place, and meeting up with future cohorts Crosby and Stills. After he got back home and found out the group was keen on making their next album an all-Dylan covers set, he gave up, quit the band, left his marriage, left England and the rest was harmony history.


Despite the turmoil, like Evolution before it, this was a pretty strong L.P. The songs were breezy and well-made, and of course, had great vocals. Unlike Evolution, they weren't desperately trying to join the psychedelic revolution, so it's not burdened with clumsy effects, apart from the odd bird noise, and the trippy Try It. Nash's tunes especially were happy ear candy, Wishyouawish smart enough to be cool instead of bubblegum.


Bandmate Allen Clarke got the rest of the leads and songwriting, and was also growing, his Charlie and Fred a slice of British observation about a rag man and his cart horse, not too far away from a Kinks lyric, but with a grand brass arrangement. Tony Hicks, well, he wasn't keeping up, his Pegasus a lame attempt to find a topic, and yes, there's a line in there that mentions "flying horse".


What I like best about the album is the great mono mix, back when those things were an art form, and the sound of Nash's maturing voice, which he of course would put to great use over in the States. In the end, both parties were right. Nash's new songs, such as Marrakesh Express and Lady of the Island were much better for his new friends, and as for The Hollies, their Dylan covers album was a huge hit for them, and by 1969, they had He Ain't Heavy, He's My Brother, a #1 in the U.K. and Top 10 world wide. So, win-win. Pretty good album this, nice packaging too.
Posted by Bob Mersereau at 9:41 PM