MUSIC REVIEW OF THE DAY: TRIO - THE COMPLETE TRIO COLLECTION 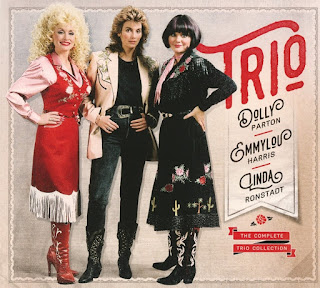 Sometimes one of my kids, or someone who notices a posting I've made in at 4 a.m. will ask me what I'm doing up so late. I could lie, and say I'm working hard, or I have insomnia, or I'm worried that Trump will get elected. But in truth, I'm up then because I can't tear myself away from some fantastic piece of music, and like a junkie, I want another high from it. Such is the case listening through to the bonus disc included here on this three-disc set of CD's from the Trio project.


Discs one and two feature the original albums released by Ronstadt, Harris and Parton, in 1987 and 1999. The third, over an hour long, is all the out-takes and alternate versions, longer than either of the original albums. It's pretty obvious it was an embarrassment of riches, and talent. The song that stopped me in my tracks was a stunning version of the old hymn, Softly and Tenderly. There is so much compassion in that original verse, such a balm for the suffering of this world, and to hear the Trio's remarkable voices sing it is truly a thing of beauty. Harris begins it a cappella, Dolly takes over as the sound builds, and Ronstadt, most surprisingly, finishes it with a rousing conclusion. How this was left off the Trio II album is beyond me, but what we missed then is most welcome now.


Both Trio and Trio II did seem a little underwhelming at the time of their respective releases, mostly because they weren't very upbeat. Ronstadt described the music as genteel, not bluegrass or country or folk, but more like parlour sounds. Even the old-timey songs Dolly brought in became softer and more tender once the three raised voices together. They realized they had a magic blend, and decided to forego their celebrity in favour of that blend. It's remarkably soothing at 4 a.m. Look, it isn't all great, sometimes I'm up then listening to Bieber. That, that's hard work, that is.
Posted by Bob Mersereau at 10:40 PM