MUSIC REVIEW OF THE DAY: THE BEATLES - LIVE AT THE HOLLYWOOD BOWL 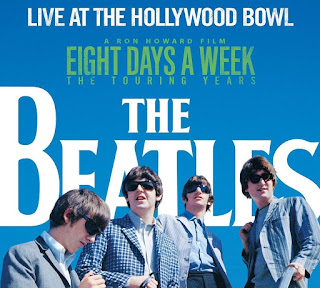 In case you hadn't heard, The Beatles are back. It's been quite remarkable how Apple (the original, Beatles record company, not the computer giant) still manages to have a big project out each fall, whether its a reissue of a movie with much better visuals, or a CD or LP campaign, with improved sound, or back to mono, or whatever is hot-selling at the time. They become must-owns for old fans and new.


This time, we're getting a new major documentary called Eight Days A Week: The Touring Years, a film by none other than Ron Howard. It is a fresh new look at The Beatles during their performing years, from The Cavern to their final show in San Francisco in 1966. Expect new footage, new interviews with Ringo and Paul, and hopefully some fresh insights. It premieres in theatres Sept. 16, and then The Movie Network will start showing it the day after, with the DVD/blu-ray due in November. But first we get this set, a companion to the whole project, a stand-alone CD from the group's performances at The Hollywood Bowl in 1964 and 1965.


Fans of a certain age will remember this LP first came out in 1977, but has been out of print for ages, and has never been on CD. It wasn't a huge hit in the first place, thanks to less-than-perfect sound quality. If you've heard it, you'll remember the screams mostly. That's what Beatles shows were like; 17,000 screaming teens, and four musicians with small amps and pathetic P.A.'s, trying to be heard above the din. Although recording the best way they could back then (3-track), it wasn't great, and even the mighty George Martin wasn't too pleased with the final results. Supposedly certain Beatles were less than happy too, which explains its length withdrawal.


Technology has given this a second life. A few years back, some better show tapes were discovered in the Capitol vaults, and those were handed over to Giles (son of George) Martin, the current caretaker of Beatles audio. Using the latest gear, his team was able to separate the instruments from the screams somewhat, and create a superior version of the album. More great news: They were able to save some more tracks too, so in addition to the 13 of the original album, there are a further four, including I Want To Hold Your Hand, and a favourite of mine, You Can't Do That.


For comparison, I dug out my old copy of the '77 vinyl, not something that's been played a lot I can assure you. The screams did make it a bit of a trial at times. Certainly, the new mix is significantly better, and instruments and vocals are more present, the screams less so. But they are still there for sure. Really, the big surprise is that the band could play this well at all, given that they couldn't hear each other or their own voices. How they kept time alone is bewildering. But trusty Ringo shows his stuff here, playing hard and loud and solid throughout. Paul's vocals too are a wonder, powerful high parts. Lennon sounds more haggard, tearing his throat to belt out his beloved rockers. George and Ringo each get their vocals, and it's all over way too soon, the half-hour shows they did (extended here thanks to the bonus cuts) about as much as anyone could handle in the frenzy.


Really, the original album captured what you need to know about these shows, the speed, the craziness, the crowd noise, the band fighting to be heard, a great group despite the huge limitations. It's still not the best way to hear them, that will always be the finely crafted studio productions, which they were trying to replicate. Yes, this is better sounding, but the documentary is going to be more revealing. You kids though, you should hear this stuff, learn what your grandparents were like when they were your age, all the screaming and such...
Posted by Bob Mersereau at 11:27 PM