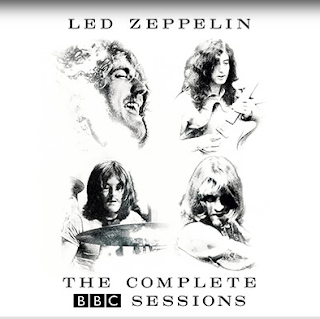 Well that's nice of Jimmy Page! While he was reissuing the whole Zeppelin catalog, he also included an expanded version of the BBC sessions album, not exactly part of the official canon, but certainly a welcome bit of insight into the early era of the group. What's new, other than a Page-managed sonic upgrade, is a further eight cuts not included on the original two-disc set from 1997, turning this into a whopping 3 CD or 5 LP set, running three hours and 20 minutes.


Unlike The Beatles, Stones, Kinks, etc., Zeppelin don't have as large a history with the BBC, since they were a late 60s/70s band, and the infamous "needle time" rules didn't affect them. Needle time was the union rule which restricted the BBC to small amounts of record playing each week, a holdover from the days of live orchestra. Pop groups had to go into the station's studios to record new versions of their songs to get around the rules, as these would be on tape, not records, see? Anyway, Zep only did five sessions back in '69 when starting out, and recorded one full live concert in 1971, and that's where all this material comes from.


Back in 1997, there was one full show they couldn't find, called Rhythm and Blues Session, but since then a tape of those three cuts has been found, which accounts for part of the new material here. There's a noticeable drop in fidelity, as it no doubt came from home tape off the radio, but this is a cool show where they were doing pure blues numbers. It's historically important because it includes the song Sunshine Woman, an "original" which was never put on an album by the group. The bad news is it's one of those blues where the group borrowed a couple of original tunes from Robert Johnson and Willie Dixon, and certainly not near the level of Whole Lotta Love, another reinterpretation of Dixon from those days. But hey, we want it all, don't we, collectors? Also here are the rest of the 1971 In Concert set expunged from the original BBC release for time reasons, and some more cuts from the other sessions that were repeats. There's now a whopping five versions of Communication Breakdown here.


So, there's nothing really eye-opening in the new tracks, but more is more, and this is all grand stuff, especially since it's a good look at the band in their more blues-inspired days. Whether covering more Dixon classics, You Shook Me and I Can't Quit You Babe, or, as it's called in legalese now "contains interpolations" when they lift Robert Johnson's Traveling Riverside, they were a rawer and more spirited band. Even in the studio sessions here, there's more of a live-off-the-floor feel, as they weren't worried about copying their latest 45 or making glossy sounds for the pop audience, like so many of the other BBC Sessions albums present.


The In Concert set from 1971 even has a couple of interesting moments, as the band still hadn't become the concert behemoth of later years, playing grandiose versions to huge crowds. It's surprising to hear Stairway To Heaven in a less epic reading, still a brand-new song, acknowledged with polite applause at the end. I'm of the mind it all went downhill after that, but that's another story and bigger argument, let's all enjoy this, shall we?
Posted by Bob Mersereau at 9:27 PM