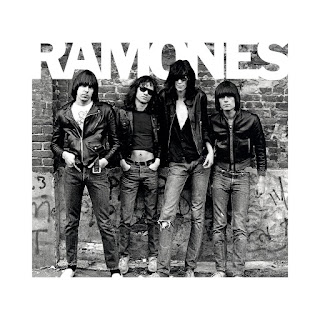 Hey ho, let's ... discuss this. Forty years on, did punk rock ever get any better than this? Maybe, but it didn't get any more influential. This one set the template, by seeming dumb but in truth being really, really smart. The Ramones took the energy and excitement of 60's garage rock, borrowed some metal and glam, and became the anti-stars for a small percentage of the population. Over the years, as the nerds took over, and Nirvana made punk an acceptable word, the group's image has become more famous than their music, and there are a lot more t-shirts out there than copies of this debut album.


Oh well, that happens with trailblazers. Everybody knows who Lou Reed is too, but they don't own any Velvet Underground albums. So maybe the various new 40th anniversary packages will entice some of those people who know who Joey and Johnny were, but can't remember the other ones, to actually learn some of the songs too. As much as they group has become a safe, comic reference for so many, it's always a bit of a shock to realize how far they did push the envelope in their time. It wasn't just the noise, it was the subject matter too: Sniffing glue, child abuse, male prostitution, Nazi iconography, dating violence, this stuff would get them shamed on social media if it came out today.


Somewhat hilariously, the album that was famously made for $6,000 has been remastered and presented in a "superior audio" 40th anniversary edition. I'm not hearing any subtle highs and dynamic lows that were previously hidden in the mix. It still sounds better when you turn it up louder. A super deluxe version is also available, with a mono mix, demos galore, two live shows (identical sets mind you) and a vinyl version to boot. What, no t-shirt?
Posted by Bob Mersereau at 9:18 PM