MUSIC REVIEW OF THE DAY: THE SEARCHERS - THE VERY BEST OF 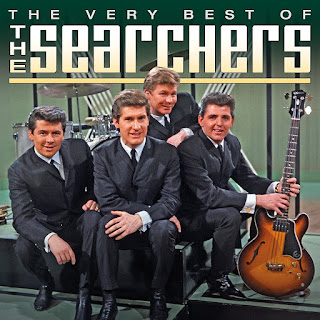 The Searchers are often the forgotten band in the British Invasion story, but they were a fellow Merseybeat band to the Fabs, and had done the same Hamburg/Liverpool club circuit. They probably would have been snapped up by Brian Epstein as so many others of the city had, except that producer Tony Hatch got to them first. In total the band charted 16 times in North America, including seven in the top 40, and of course did even better in England.


The Searchers had a great vocal sound, and a good two-guitar attack, the hallmark of the beat groups. What they didn't have was solid songwriters in the band, so they had to rely on grabbing material from the top writers of the day, often battling it out with other versions of the same songs. Twice they took Jackie DeShannon singles and had better success, probably the best two songs they ever did. They bested her version of Needles and Pins (written by Sonny Bono and Jack Nitzsche, Phil Spector's studio hands), giving them their best-known and enduring hit. They also had the hit version of the DeShannon-written classic When You Walk In The Room.


But 1964 to 1966 were tremendously competitive times on the charts, and follow-ups were needed fast. Without a well of self-written material, the group bounced from U.S. cover versions (a big hit with The Clovers' Love Potion #9) to hot new hitmakers (P.F. Sloan's Take Me For What I'm Worth) to Jagger-Richards' cast-offs (a cut called Take It or Leave It, a minor album cut). Their last chart entry at that time saw them covering fellow Invasion group The Hollies, a low-level placing of Have You Ever Loved Somebody, which sounds like The Hollies with louder guitars. The group soldiered on for many years, and I recall seeing a 'new wave' version of them in the 80's which almost got them going again. Apparently there's still a version out there.
Posted by Bob Mersereau at 10:56 AM