MUSIC REVIEW OF THE DAY: WHAT HAPPENED, MISS SIMONE? (Blu-ray/CD) 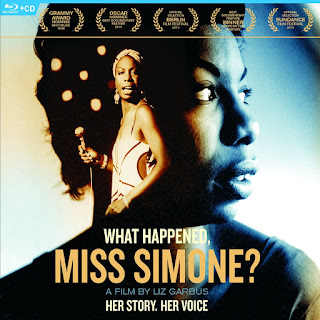 This is a documentary produced for, and running on Netflix, about turbulent life of the incredibly talent Nina Simone, and if you're one of the three households in Canada not subscribing to the service, you can now pick up a copy for yourself on Blu-ray or DVD. There are benefits to this of course; better quality, both visual and audio, there's a few bonus interviews, nothing spectacular but appreciated, and there's also the chance that Netflix will dump it from the playlist at some point. It's an excellent piece, so I'd hate for you to miss it.


If you've never been exposed to her music before, I would be surprised if you don't come away amazed and a fan. There's never been anyone like her, a classically trained pianist with a tremendous alto, who blended jazz and soul and pop and show tunes and civil rights anthems and controversy in an explosive career. If you don't know her very intense story, well, where to start? Let's just say she suffered; from abuse, from racism, from mental illness, from chauvinism, from every kind of societal pressure. Yet she reached dizzying heights, not only with her art, which was never comprised, but with her success as well, joining the great intellects of the civil rights movement, standing, unblinking with Dr. King, Malcolm X, Lorraine Hansberry and Langston Hughes. She became increasingly erratic thanks to her undiagnosed illness, and sadly her legacy has long been tainted by the stories. Hopefully the documentary, which was nominated for an Oscar last year, will go some way to restore her musical fame, as more and more people watch it.


Now, here's something they've done for this package which is darn brilliant and should be followed by many more video makers: Included in the package as a second disc is a well-curated best of. You can watch the film, get a thirst for more music, and go right to the cuts you've just had a sampling of. And of course, that's a good tempter even if you do have Netflix.
Posted by Bob Mersereau at 1:02 AM